In fact, this is such a consistent alignment in almost every Disney, Dreamworks, and Pixar film that during the recording of this week's Narrative First Podcast I had trouble deciphering where the Main Character Throughline landed for Zootopia. I had expected Universe as was the custom and seemed appropriate for the first bunny rabbit to be a cop. But Hopps clearly dealt with her own subconscious racist attitudes towards the end of film which would have her in Mind.

Turns out she was somewhere in-between.

Thanks to listener Mark Vander Vinne of Vander Vinne Studios, I finally saw why the film worked for so many people and what I was missing. Mark suggested the alignment you will find below, one that in retrospect seems so blatantly obvious. 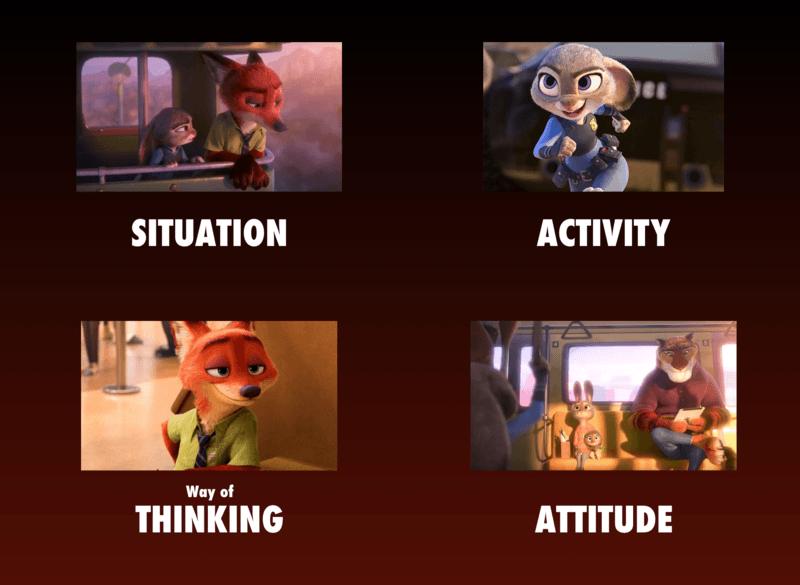 The Throughlines of Zootopia

The conflict in Hopps' personal Throughline doesn't stem solely from her fixed place in the Universe--everyone is dealing with a problematic situation in some sort of fashion or another. Instead, it is her Physical Activities, her attempts at Doing something that no other rabbit has done before that is the source of her difficulties and something that is unique to her, and her alone. That is the definition of a Main Character Throughline.

This puts Nick the Fox in Psychology and focuses his Concern on Being; in other words, playing the hand that he has been dealt. "Everyone comes to Zootopia, thinking they could be anything they want. But you can't. You can only be what you are. Sly fox. Dumb bunny." This Way of Thinking is just the kind of thing that challenges Hopps and her attempts at making a difference in the world. Nick has achieved some level of success with this particularly bleak viewpoint of the world...perhaps she should too.

At this, the "personality" level of the dramatic structure, Zootopia shares a similar narrative drive to last week's Throughline Thursday, Beasts of No Nation. A Main Character struggling with Activities who is challenged to grow because of the subtle and not-so-subtle Manipulations of an Influence Character.

But the similarities end there, for rather than explore the external fixed state of affairs that Beasts of No Nation does, Zootopia examines the deep-seeded Fixed Attitudes, or racism, inherent within the instincts of an animal. These Preconscious impulsive responses--the impulse to pull a child close on a bus, or carry "Fox-spray" wherever you go--are the primary sources of conflict in the Objective Story Throughline.

The arrangement of Throughlines determine the personality or Genre of the narrative being explored. These Patterns of Conflict have the largest impact on how a story will feel to an audience. That is why so many people find Zootopia fresh and exciting.

Placing the Objective Story in Mind naturally encourages the Relationship Story Throughline into Universe which again feels perfect for the story we were presented. A fox and a rabbit forced into working with one another. Both have reasons for distrusting the other because of who they are externally, who they are on the outside. Overcoming that distrust rests at the heart of their relationship.

While Zootopia still has an issue with its broken Story Continuum, the Throughlines come across strong and purposeful. A bold choice to explore an Objective Story in Mind, particularly within the context of an animated film built for a Western audience. It is something you would only expect to find in an Eastern animated film, like When Marnie Was There. Hopefully this is a sign of greater and more imaginative storytelling to come.

The Four Throughlines of Zootopia