Every complete story consists of Four Throughlines. Mash these all together and you have the recipe for a satisfying and emotionally fulfilling work of art.

Most schools of thought combine the Main Character Throughline with the Objective Story Throughline thinking the "Protagonist" always has to be the one motivating the action of a story...ugh. This works for some stories, but not all. Seeing and appreciating the difference between the Main Character and the Protagonist opens up a such an amazing bounty of storytelling possibilities that it's hard to understand why so many hold on to this outdated line of thought. Free your mind, Neo.

Whiplash oozes with entertaining and compelling conflict. Looking for the source of that conflict becomes job number one in ascertaining where the Throughlines fall within the narrative structure of the Dramatica Table of Story elements. 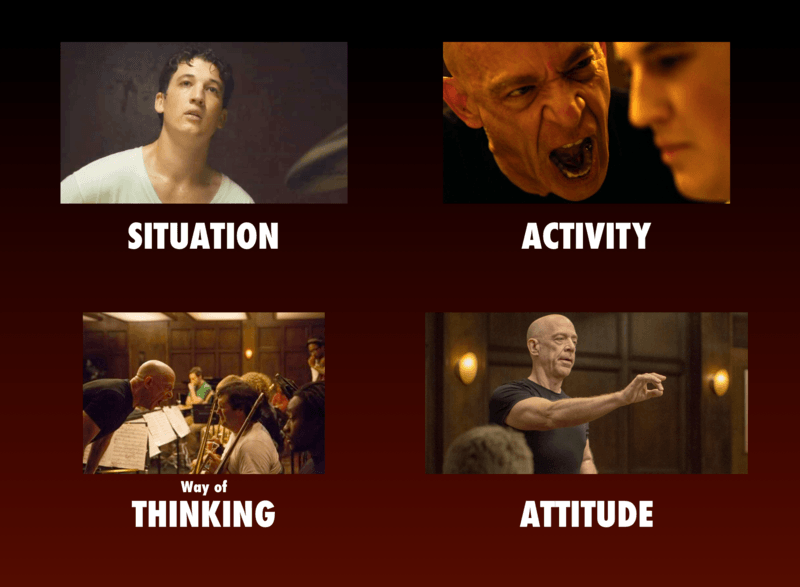 The Throughlines of Whiplash

As with our previous Throughline Tuesday Moulin Rouge!, the first thing that stands out in Whiplash is the relationship between student Andrew Neiman and teacher Terrence Fletcher. Hurling cymbals. Slapping faces. Their relationship centers around brutal and punishing Activities wherein Mentor beats upon Mentee in an effort to drum up some level of passion.

Ask anyone what they remember about Whiplash and they'll tell you how much of a dick Terrence was to Andrew. That Fixed Attitude that Terrence brings influences and impacts every single person he comes into contact with. That attitude defines who he is and why he is able to challenge Andrew to face his own personal problems.

And what were those problems? It can be hard to remember as it is downplayed within the narrative, but Terrence is smart enough to jab our Main Character with it: Andrew's mother deserted both Andrew and his father when he was young--a Situation that continues to haunt the young drummer. This heavy chip on Andrew's shoulder burdens him to the point of ending things with a new girlfriend because he doesn't want her getting in the way of being great. Andrew would rather be alone than risk being hurt the way he was as a child.

The Objective Story Throughline returns to Terrence and his dysfunctional classroom. Berating students for playing in the wrong key and psychologically torturing them establishes a group dynamic defined by conflict arising from a Way of Thinking. Breaking his students down and changing how they think is the problem everyone in the story suffers from.

It's important to note that the original term for Way of Thinking in Dramatica was, in fact, Psychology, and may be more accurate in terms of defining the conflict shared by everyone.

Whiplash is one of those films you can watch over and over again. That tendency towards repeated viewings is almost always a guarantee that all Four Throughlines exist. Why? Because having the opportunity to experience conflict both from within the Main Character Throughline and from without in the Objective Story Throughline perspective is something we simply can't achieve in our own lives. That's why we love stories and why Whiplash will always be one of the greats.

The Four Throughlines of Whiplash