Screenwriter Aaron Sorkin would probably be the first one to tell you to disregard structure and write from the heart. Like the great David Milch, Sorkin creates masterpieces while flying by the seat-of-his-pants. To wunderkind like this, structure is a crutch and a cage–something to laugh at and deride; something not worthy of further study.

Yet, in both cases, their greatest achievements shine as stunning examples of carefully crafted and well-structured stories. Forget Steve Jobs for a moment, and focus on Sorkin’s 2009 Facebook piece, The Social Network. By pitting two college buddies into deep personal conflict and setting that relationship against the backdrop of creating the world’s largest and most profitable online social network, Sorkin manages to provide Audiences everywhere a deeper meaning to what it means to stay connected.

Both the Objective Story Throughline and the Main Character Throughline focus on the problems of over-production. In the former we see it played out with the development of the social platform Facebook and in the latter we see it within Zuckerberg’s own predeliction for creating something more out of nothing. This drive to create mountains-out-of-molehills comes off as an obstinate and bad Mind through Mark and and as Psychology and back-stabbing through everyone else involved (including Mark Z.). 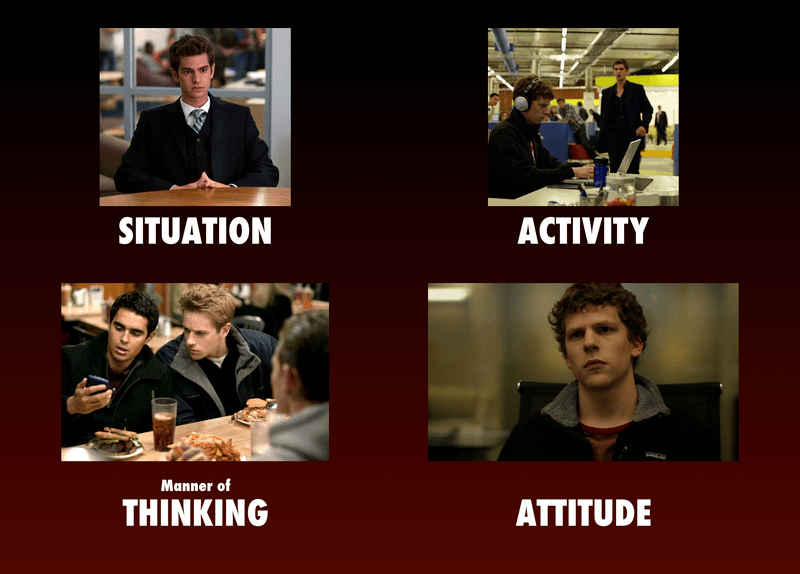 The Throughlines of The Social Network

Eduardo Sevarin challenges Mark’s asshole attitude with the ramifications of being well-off. Does Sevarin entertain a better reputation because of his money, or because of who he is? Sorkin’s juxtaposition of Sevarin’s Universe against Mark’s mindset works perfectly for the Influence Character Throughline perspective.

Their friendship plays out with various instances of problematic Physics, both known and unknown, taken within their Relationship Story Throughline. When friends, they build the Facebook together, when enemies they work tear each other apart–both by shutting off access to resources and in Mark’s case, shutting out Sevarin legally from any future position within his company.

Great stories can’t help but structure themselves around four distinct perspectives. In our own lives we often can’t tell who is right or who is wrong. A narrative, particularly one involving real world events, attempts to set the appropriateness or inappropriateness of actions taken within coherent and consistent contexts.

Whether Sorkin meant to or not, The Social Network enjoys the status of “a great film” because of its complete and well-positioned structure.

The Four Throughlines of The Social Network