The Four Throughlines of a complete narrative grant shape to meaning. Codifying the kind of conflict encountered in the story from four different perspectives affords the Author a level of familiarity unheard of in lesser forms of communication—palatable forms that give way to subjective inaccuracies.

The Challenge of the Objective

A recent letter challenges my analysis of The Prestige:

Relationship Story “Rivals” in the Activity Domain and Learning: Throughout the movie their relationship is defined not simply by trying to out-perform each other with their tricks (Domain of Activity), but more importantly working out the other’s secrets. How often when they think of each other do they say, “I have to know how he does it!

The Relationship Story Throughline of The Prestige highlights two magicians bent on screwing with each other’s Mind. The reading of the diaries focuses their shared intention on the unraveling of what the other recalls. The evidence of the text itself and the suspicion that it contains something more, the lies they mask, and the revelation of their truest intent forms the foundation for their relationship.

They do indeed try to “out-perform each other,” but this describes how they subjectively see the conflict between them.

The Dramatica theory of story—and the storyform it identifies— stand in sharp contrast to everything else written about narrative because of its objective point-of-view. Aside from the Plot Sequence Report, the bulk of the theory looks to story from without, not from within.

The challenge then for anyone approaching the theory for the first time is to distance oneself from what the characters think and feel. Instead, saddle up to the story and treat the narrative itself as an individual personality.

Remaining locked within the subjective perspectives afforded by the individual characters blinds the observer to an accurate account of the source of conflict.

The letter continues with its deconstruction of my analysis:

Objective Story “The Price of Magic” in the Manipulation Domain and Conceiving: Michael Caine keeps trying to get them to think like old-school magicians, to know their limits and live within them, to stop trying so hard to be the greatest that they go too far.

Does this identify the kind of conflict found in the Objective Story Throughline? Or does it indicate something Caine’s character himself might consider being a difficulty?

What does the story consider to be problematic?

Like The Shawshank Redemption and The Fugitive, The Prestige centers conflict in the Objective Story Throughline around the unjust imprisonment of an innocent man. This imbalance in the Universe separates Borden from his wife and child, Angier from the secret he longs to unravel, and everyone from the peace that results when the scales of justice balance out. Tit-for-tat. ”Abracadabra” and a well-placed flintlock shot deliver the parity needed to resolve the story’s central inequity. 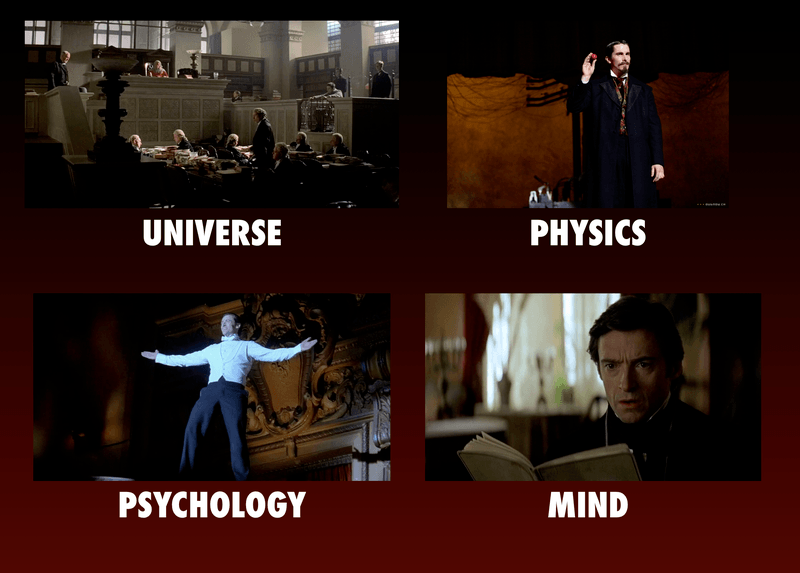 The Throughlines of The Prestige

The Easiness of Subjectivity

Influence Character “Alfred Borden” in the Situation Domain and the Present: Borden is stuck on frickin’ death row! His situation means unless he gives Angiers the secret, it will be lost forever.

This situation fails to challenge the way Angier solves problems. The purpose of the Influence Character Throughlines is to provide an opinionated perspective on how to best approach conflict.

Casablanca’s Ilsa is a prime example of an Influence Character who impacts the Main Character through a unique point-of-view regarding her situation. Rick refuses to stick his neck for anyone, yet Ilsa is willing to attach herself to one of the most wanted men in Europe because she so firmly believes in Victor’s mission. That problematic Situation of being married to Victor impacts and influences Rick to change and adopt her point-of-view eventually.

Alfred’s situation as a prisoner fails to carry a significant emotional and subjective perspective behind it—he just finds himself in a dangerous situation.

This error in judgment highlights the problem of more natural terminology first discussed in the article The Fugitive: When a Situation Isn’t a Situation. When given the option of Universe or Physics to describe the kind of impact Borden challenges Angier with, it is clear that the Physics of doing above and beyond what is needed to be successful wins.

Borden impacts Angier’s understanding by presenting a troubled account of doing whatever it takes to succeed. Less the secret itself and more the Physics of keeping the reality a secret, Borden’s Influence Character Throughline perspective challenges Angier to match his adversary with even more significant feats of magic.

Main Character “Robert Angier” in the Fixed Attitude Domain and Conscious: As is pointed out to him constantly throughout the film, he has everything he needs to be content – it’s his contemplation that screws him up. He ignores all the good things in his life and only judges himself based on whether or not he’s “the greatest.”

Here, the letter writer and I find parity. I agree with Angier’s fixation on being the greatest and on his refusal to back down as creating problems for himself. But I see that obsession driving the inequity of his Throughline, rather than identifying the kind of conflict. I see it more as a Problem, rather than a Domain.

Besides, placing Angier in Mind shifts the other perspectives out of position and shatters the integrity of the storyform.

One can always make an argument for the Domain of a Throughline to the exclusion of the other three. Angier’s problem could lie in Mind just as much as it lies in Psychology, or in Universe, or in Physics. It’s once you try to balance all four perspectives at once within the context of four separate Throughlines that one—and only one—combination survives the analysis.

Robert Angier suffers from a dysfunctional manner of thinking: ”No one cares about the man in the box, the man who disappears.” While Borden offers an alternative perspective on this notion, Angier’s Psychology refuses to entertain such a thought. Driven by an obsession for fame and the desire to “make them wonder,” Angier’s steadfastness steers his Main Character Throughline to inevitable tragedy.

Separating content from form requires a level of objectivity only accessible with a greater understanding of Dramatica. Returning to the original terminology—Universe, Physics, Psychology, and Mind—along with thinking of the story as a character or individual personality opens one up to a greater appreciation of the intricacies of a narrative. With that objective point-of-view firmly grasped, deficiencies in the story stand out with clarity and distinction.

No one cares about the man in the box—about the structure that makes the magic possible—but the man who disappears rightfully claims responsibility for the look of wonder on their faces.

The Four Throughlines of The Prestige