The Four Throughlines of a complete narrative serve a far greater function than simply identifying the "subject matter" of a particular storyline—each provides a unique perspective on the story's central problem.

How does one define a story's central problem?

You really can't. In fact, that is why the Four Throughlines developed over the centuries. The inability to concretely describe an inequity necessitated the development of a means by which an Author could approximate the conflict they were exploring by securing the context to a fixed point-of-view.

Our minds assume four different contexts when analyzing a problem:

Those four contexts cover every single way one can investigate the fallout from conflict resolution.

Connecting the Personal with the Objective

If you really think about it, the above conceptual understanding of story is quite astounding. The Main Character isn't some random character thrown in there to attract a star personality—the Main Character shares a common inequity with every single character in the rest of the story. The problem only looks different from his or her perspective. 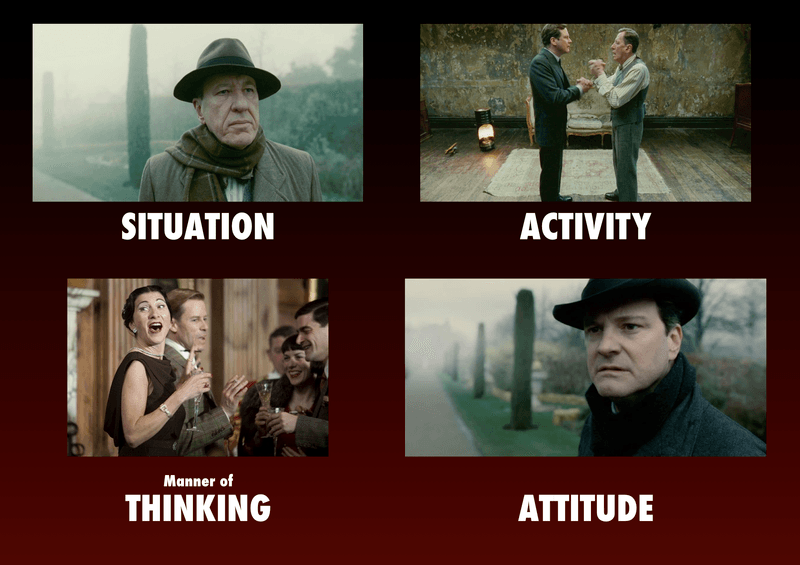 The Throughlines of The King's Speech

Take King Henry VI—or Bertie (Colin Firth)—in Tom Hooper's The King's Speech. Bertie's apprehension and nervousness at assuming the role of King at a time of great need stems from great personal inadequacy: he stammers and finds himself unable to deliver a simple speech. As a representative of the Main Character Throughline, Bertie's public hesitation originates from a mindset of low self-esteem (Fixed Attitude).

This same inadequacy plagues everyone in the story, but not in the way that Bertie, or we as the Audience, experiences it. From the Objective Story Throughline point-of-view, the inappropriate behavior of the entire Royal family serves as an indicator of trouble for all of England. The dysfunctional behavior of brother Edward (Guy Pearce)—stemming from his desire to marry American socialite Wallis Simpson (Eve Best)—syncs perfectly with Bertie's own personal inadequacy. We see inadequacy from both an I perspective and a They perspective. On the brink of war, the citizens of England find themselves falling into conflict over competing Manners of Thinking.

Inequities do not look the same from every angle. Imagine placing a stick within a murky aquarium; from some perspectives the stick will look straight, from others it will appear quite bent. The same phenomenon occurs in story.

From Lionel Logue's Influence Character Throughline perspective (Geoffrey Rush), the inequity appears as the assumption of becoming an integral part of one's developmental process. As a speech therapist from the other side of the tracks, Lionel refuses to let his Situation prevent him from assimilating into his patient's life. His demand that patients refer to him as "Lionel", regardless of convention, influences and challenges Bertie to deal with his own personal outlook.

From here, the Relationship Story Throughline between Bertie and Lionel grows from doctor/patient to lifelong friends. The Activity of working together to teach Bertie to overcome his inadequacy twists the inequity to look more like scrutinizing and validating, rather than simple inadequacy. Cousins in conflict to be sure——one can see how inadequacy calls for closer scrutinization—yet the difference brought about by the shift in perspective is essential for a greater understanding of the narrative.

A Close Approximation of Conflict

In truth, The King's Speech is not about inadequacy, inappropriate behavior, the developmental process, or close scrutinization. Rather, this film purposefully examines what exists between those four elements of conflict. The Four Throughlines, and the four perspectives they represent, offer our minds an opportunity to zero in that intangible inequity that we sense, yet somehow can't bring ourselves to define. An inadequacy to be sure, but one that we have managed to develop a great workaround for:

—a complete and well-rounded story.

The Four Throughlines of The King's Speech