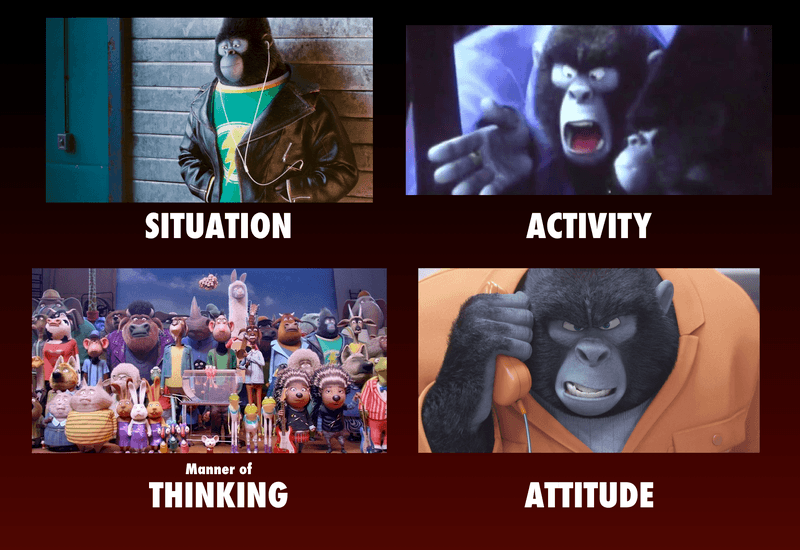 The Throughlines of Sing!

Ensemble stories, like Sing!, tend to focus on the dysfunctional relationships between various characters rather than any goal they may share. The conflict arises from their various manners of thinking (Psychology) and their attempts—whether conscious or subconscious—to manipulate the people around them. The Objective Story Throughline of Sing! takes this approach in laying out its plot.

Johnny the gorilla (Taran Egerton) stands out as the one singer we get to know on a more personal level. His relationship with his father is the only relationship that exists outside of the Objective Story Throughline perspective—a key indicator for the Relationship Story Throughline and a great clue as to who the Author intended to assume the position of Main Character.

Johnny is a great singer trapped inside the body of a behemoth gorilla. This Universe makes it almost impossible for him to follow his dreams. His Main Character Throughline allows us to experience what it must be like personally to want to do something your body wasn't theoretically designed to do.

Their relationship as father and son centers around the Physics of robbing banks, practicing and driving getaway cars, and ultimately bringing the house down together. Their Relationship Story Throughline provides the heart of the story to Sing! and offers a nice counter-balance to the gentle manipulations found in the Objective Story Throughline.

They want to be something they're not. I am stuck in an untenable situation. You are fixated on what I can and cannot do. And We can't seem to work together. Objective Story, Main Character, Influence Character, and Relationship Story perspectives sharing different contexts on the same central inequity.

Sing! may resonate with too much familiarity for most, but the foundation on which it rests its narrative is sound and reliable.

The Four Throughlines of Sing!