Genre shies from the spotlight when it comes to prerequisites within the context of story structure. Plot boasts through Acts and Goals. Character projects through ego and motivation. And Theme bridges the gap between the two with its careful consideration of the standards of evaluation involved. But Genre?

Beyond the entry point for a weekend of binge-watching on Netflix or perhaps a starting off point, Genre appears absent in prescribing specific elements of the structure of a story.

Unless you’re coming from a Dramatica point-of-view.

An Arrangement of Perspectives

The Dramatica Table of Story Elements breaks narrative structure down into four distinct towers of consideration. At the bottom rests Character and motivations. Move one level up, and Thematic issues take center stage. Above those, Plot corrals the previous two into a focused purpose within each perspective.

These three leave Genre the enviable position of holding sway over all other dramatic concerns. The arrangement of Throughline perspectives and their attachment to defined Domains of conflict generates the personality—or Genre—of the narrative.

David Fincher’s se7en is a thriller. Is it a psychological thriller along the lines of Get Out or A Simple Plan? Or is it something more immediate and physically violent like The Usual Suspects or Reservoir Dogs.

An examination of the Four Throughlines and the conflict they explore provides the answer.

And we can look at this conflict from four different perspectives:

Narrative serves as an analogy to a single human mind trying to solve a problem. Addressing inequity from every available perspective guarantees a completeness of consideration that matches our need to understand the nature of the inequalities fully. The very best films, novels, and television series offer all four of these perspectives to the Audience.

In se7en, Detective William Somerset (Morgan Freeman) sits on the edge of retirement. His point-of-view on what it means to be an aged veteran of horrors unspoken sets the Main Character Throughline perspective of the film. Somerset‘s sympathetic advice for Tracy in regards to her unborn child resonates with a personal account of the Universe as something regretfully unchangeable.

Tracy’s husband, David Mills (Brad Pitt) teams up with Somerset as a recent transfer. Short-tempered and idealistic, Mills’ fixed Mindset challenges the grizzled veteran to reconsider his approach to solving problems, both personally and within the scope of bigger picture through his Influence Character Throughline perspective. Mills anger—his rage—drives Somerset to rediscover his own. 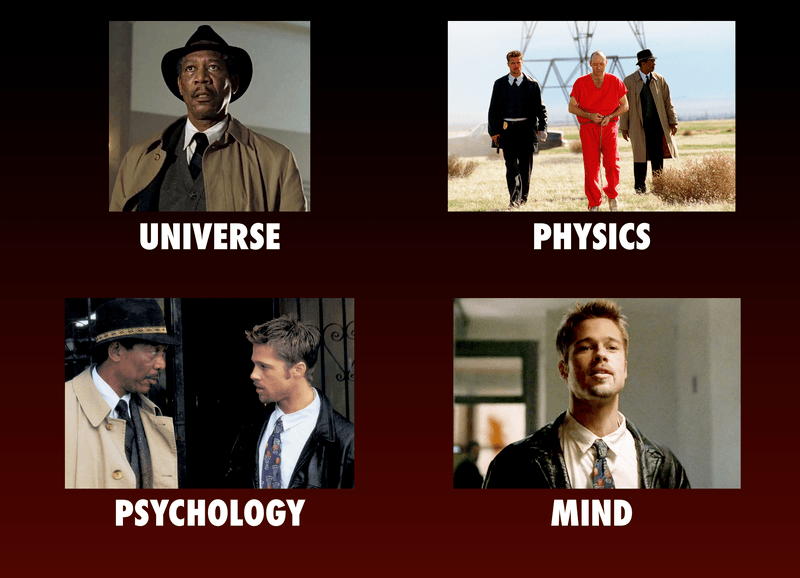 The Throughlines of se7en

Serial killer John Doe (Kevin Spacey) seeks to educate humanity through a series of murders patterned after the Seven Deadly Sins. Finding roots in Catholic orthodoxy, these vices-pride, greed, lust, envy, gluttony, wrath, and sloth—admonish humanity to resist their evil ways. Through deplorable acts of violence, Doe tends to the Physicality of these crimes by visiting them upon sinners worthy of his wrath. The investigation and eventual confrontation of John Doe set the scope of the Objective Story Throughline.

The Relationship Story Throughline between Somerset and Mills is more than a working one—it's a mentorship that experiences tension through different manners of thinking. Somerset visits the library at midnight while Mills hides the Cliff-notes version deep within his desk. The idealistic Mills thinks good vs. evil; Somerset sees apathy as a solution. Incompatible at best, yet something more profound underneath that flips the script on who is the mentor and who is the mentee--a true Psychological relationship:

Yeah, "naive" as that may sound. And I don't think you quit because you believe the things you're saying. I think you want to believe them, because you quit. You want me to agree with you: "Yeah, you're right, Somerset. This is fucked. Let's go live in a fucking log cabin." Well, I don't agree with you. I can't afford to. I'm staying.

The Personality of a Story

Se7en is a physical thriller, as immediate as A History of Violence and Eastern Promises. The story explores suspense as an external process, rather than an internal one. Though tempered by 2017 standards, the horror takes on a physical presence consistent with narratives that position the Objective Story Throughline in Physics.

From Dramatica's unique perspective, Genre sets the personality of the narrative. se7en is neither contemplative nor psychological. While dark and sinister, the darkness arrives in the form of physical violence, not mental.

Familiarize yourself with the alignment of the various Throughline perspectives in your narrative and allow your story to introduce itself—you can't help but recognize its personality.

The Four Throughlines of se7en