The little known but exquisite Nightcrawler provides an excellent example for this week's Throughline Thursday. As an Academy Award nominee for Best Original Screenplay, this neo-noir by writer/director Dan Gilroy excels at balancing the perspectives needed to tell a complete and engagaing story.

Main Character Lou Bloom (Jake Gyllenhaal) lives alone in a simple one-bedroom apartment with only two plants to keep him company. The bleak economic landscape gives purpose to Lou's struggle and defines his rise from the bottom to the top. The pursuit of the American Dream is Lou's dream--to make something more of himself and to improve his Situation.

The cutthroat world of tabloid journalism provides the backdrop for Lou's rise up the video broadcast ladder. The backstabbing and backroom manipulations of delivering the nightly news brings everyone in Nightcrawler into conflict over their different Ways of Thinking. Lou, Nina (Rene Russo), Joe (Bill Paxton), Ann (Linda Cusack), Frank (Kevin Rahm), and Jackie (Kathleen York) all scheme and coerce their way to the top. 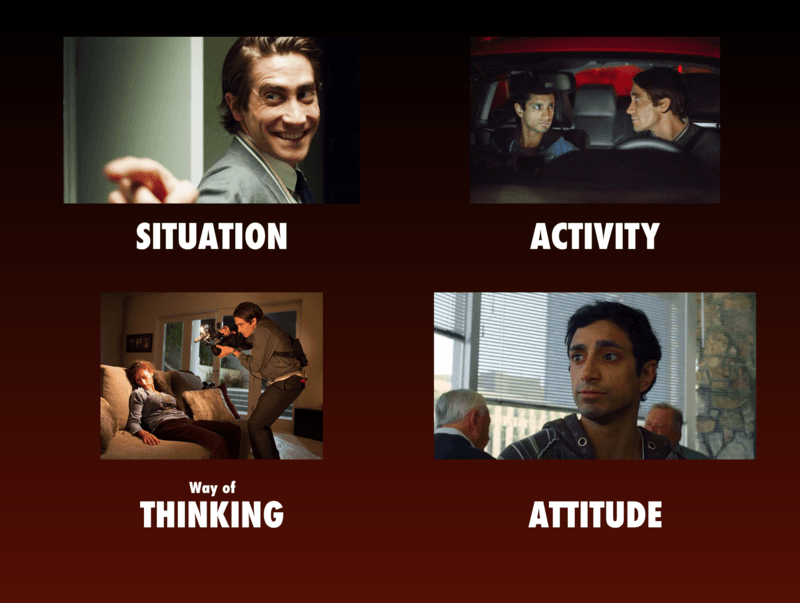 The Throughlines of Nightcrawler

Great stories work this way: they take the same force for resolution--here, the rise to the top--and show it from different points-of-view. With Lou we see that rise personally; what it would feel like to personally be in that Situation. And then with everyone else we see that same struggle to rise from an outside-in point-of-view, from an objective perspective. From that point-of-view the struggle to rise looks like psychological Manipulations.

The problems I have and the problems They have. By presenting both, an Audience gets to experience what it is like to be within the problem, and without.

Great stories continue that look at a force for resolution in all Throughlines. Nightcrawler is no exception.

With Lou's assistant Rick (Riz Ahmed) we see what it is like to grow from someone who could care less about being ambitious to someone who blackmails the one who lifted him up. Rick's Fixed Attitude--the thing that sparks Lou's curiosity with him in the first place--is his lack of personal drive towards anything more than basic survival. Lou sees a lot of himself in Rick, and takes him under his wing to help guide the misguided soul.

And their Relationship is where the story completes its look at the struggle to rise to the top. A mentor and his protégé--engaged in the Activity of teaching and learning the tricks of trade. Lou's mentorship excels all expectations, ending with Rick making one final ambitious move.

The Four Throughlines of a story are more than a simple gimmick or observable quality of story--they define and approximate the reason for writing a story in the first place.

The Four Throughlines of Nightcrawler