The Beginnings Of Dramatica

Yesterday I visited the birthplaces of Dramatica. The first was the Coral Cafe in Burbank, California. It was at this restaurant in 1991 that Chris Huntley and Melanie Anne Phillips first began discussions that would make Dramatica a reality. This wasn't the first time they had this talk.

Ten years prior, Chris and Melanie had made a film that they knew didn't work. While they had excellent resources to turn to at USC, it simply wasn't sufficient enough to answer their questions. They began to develop concepts that would eventually turn into Dramatica--the Rule of Threes and a balanced sense of Character Archetypes--but eventually abandoned their pursuit. It was Chris who put their discovery on hold. He realized that the two of them, both in their mid 20s, simply didn't have enough life experiences to draw from. They put their work away and concentrated on other efforts, Melanie on a career in editing and Chris on developing software for Hollywood through his company Screenplay Systems (now Write Brothers, Inc.). 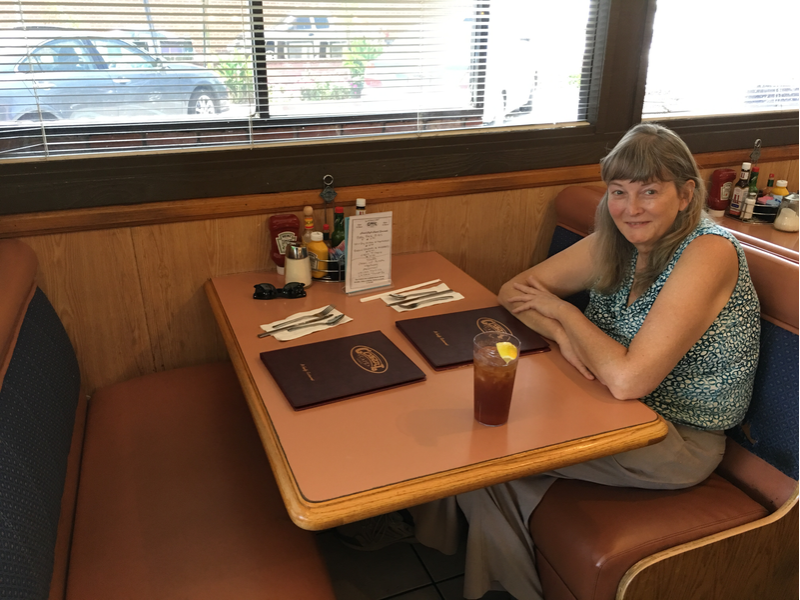 As we sat in the same booth where Chris first broached the idea of returning to their theory, I was struck with the notion of how something so monumental could happen in such a mundane place. Having worked several decades in the area at both Disney Animation and Dreamworks Animation, I never once ate at here; this restaurant was always someplace you would drive by. Yet here it was all this time. Like Chris and Melanie themselves, it was nondescript and humble--waiting for someone else to discover them.

After lunch we headed to Melanie's childhood home, another humble place built to house veterans returning home from World War II. It was here in the metal enclosure her grandfather built to extend the house that Melanie awoke from her fever dream with the formula that is the basis for Dramatica. One side divides, while the other side multiplies. Or K/T=A*D. Knowledge divided by Thought equals Ability times Desire. As complicated as that may seem, that equation explains the balanced nature of a complete story. It codifies why some stories have "holes" and why others have weak, or underdeveloped characters. In short, it explains how and why stories work.

But the true gem of the afternoon was hearing Melanie describe the place where Dramatica truly began. It was on a swing set at the back of the house (now a garage), that Melanie first considered the differences between subjective realities and objective realities. At age 5 she began to wonder why her mind could only see part of the picture while God could clearly see all.

To explain it further would only do a disservice to the story. Melanie is a master storyteller and a great presenter. Listening to her speak of story and of the human mind's part in the process of narrative is a rare treat and something I will always be grateful to have in my life. After watching this video, I'm sure you will feel the same.

Melanie and I will be conducting a series of classes and workshops over the coming months beginning next Monday, May 16th. To learn more please visit our Foundation|Next page.