Last night was our monthly Dramatica Users Group meeting where we gather together with theory co-creator Chris Huntley and analyze a film through the lens of Dramatica. This month was the super happy sing-along Sophie's Choice starring Meryl Streep, Peter MacNicol, and Kevin Kline. 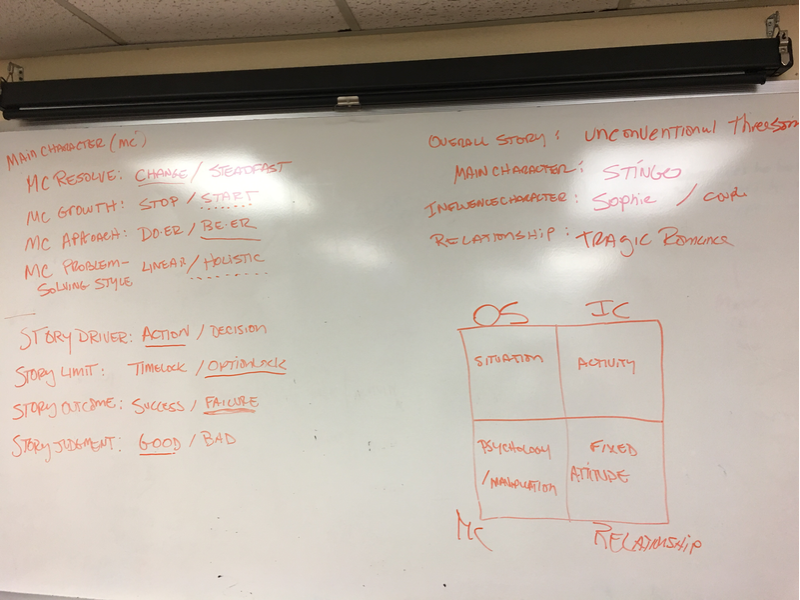 Story analyst confession here right at the start: I couldn't finish the whole thing. I had seen the choice Sophie makes on YouTube awhile back and found it one of the most upsetting scenes I've ever seen. I thought maybe this was the reason why I turned it off 45 minutes in--that maybe I just didn't want to get to that place again. Plus, it was kind of boring, and I had yet to watch Game of Thrones this week. And because my best friend ruined the spoiler in The Empire Strikes Back for me when I was nine years old, I have this thing about seeing movies and shows when everyone else does.

Turns out there was something else going on.

The Main Character Throughline in Sophie's Choice is revealed through the character of Stingo (Peter MacNicol). One would assume that, because he is a man and because I am a man, and because I'm supposed to assume his position in the story that I would be able to relate to everything he says and does. But that wasn't the case.

The Dramatica theory of story identifies a story point known as the Main Character Problem-Solving Style. This point of reference sees the Main Character solving problems either through Linear problem-solving or through Holistic problem-solving. Generally speaking, guys have a harder time relating to Holistic thinkers. They do great with Linear thinkers because hey--who doesn't like someone who thinks like them? But Holism? It just doesn't make sense to linear thinkers that you would waste your time trying to balance out things when you could go right for the throat.

Which is why I checked out so early.

I mean, I love Moulin Rouge!, but combine that scene I knew that was coming up with a Main Character who thinks that just by inserting themself into a situation that somehow someway they will be swept up and pulled along...and I'm checking out to catch up with the Starks and the Lannisters.

Next month is the equally as happy Kramer vs. Kramer. Summertime fun!