Our Analysis Of Kramer vs. Kramer

At the monthly Dramatica Users Group meeting last night, we watched the Academy Award winning Kramer vs. Kramer, starring Dustin Hoffman and Meryl Streep. To say that I loved the film is an understatement. I miss acting. To say I was underwhelmed by the storyform we discovered is also an understatement.

There is an area of narrative within the Dramatica Table of Story Elements that bores the heck out of me. Predominantly seen in films from the mid-20th century, this storyform features an Objective Story Concern or Goal of Obtaining, and a Main Character Concern of the Future. 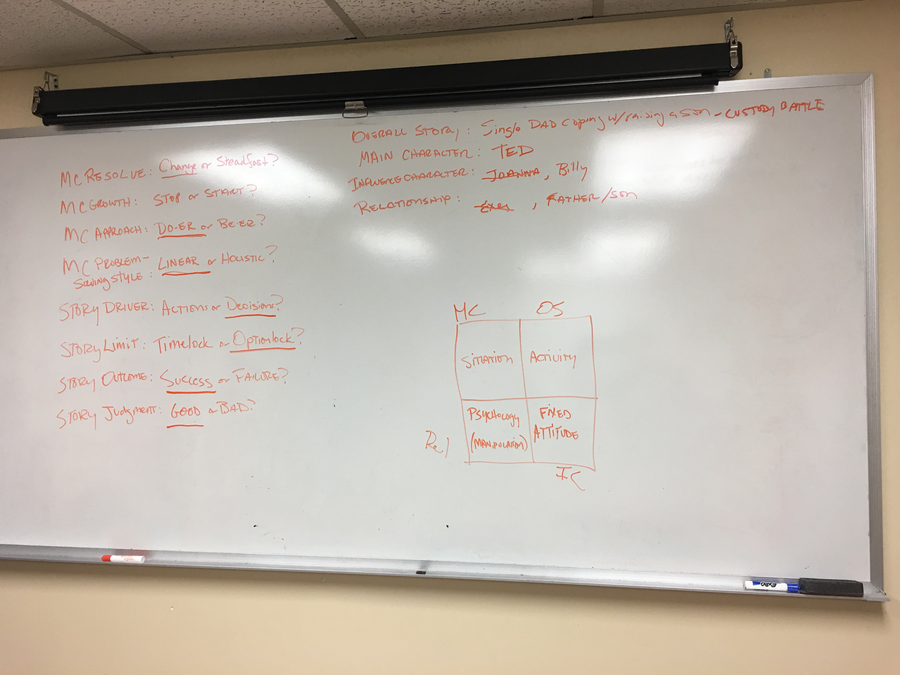 This genre of storytelling has been done so many times that I can't help but groan and complain when it ends up in there. For some reason it feels so pedestrian to me and unsophisticated. Narrative can explore so many more interesting things than Considering and Reconsidering, or Logic and Feeling. Ugh. Even typing that out bores me to tears.

That's why--if you listen to the podcast analysis or watch our online analysis of Kramer vs. Kramer--you hear me try and argue for a different storyform. I loved the film and wanted it to be anywhere else but there in the chart. At that point confirmation bias takes over and I lose all sight of what is really going on. Eventually I saw the light, but you can hear me fight it every step of the way.

This is always been a problem for me. Ever since Dramatica opened up my mind to the subtleties and sophistication in narrative, I try and gear stories towards that sophistication. But this is the end of the 1970s; Kramer vs. Kramer is a product of that time period. The film maintains an innocence and no pain-lotta gain personality that permeates film during that century. And what's more--it really shouldn't matter.

A story is a story no matter where you find it in the Dramatica chart--and I need to realize that once and for all. I can't let my own prejudices or subjective interpretations get in the way of an accurate analysis. Dramatica is objective after all--no time for lame opinions. I can't remember the last film with an Objective Story Problem of Consider so if nothing else, Kramer offers up a great example of what a story with that problem would feel like.

Ted (Dustin Hoffman) is an inconsiderate man and grows to a point where he can reconsider his effect on other people and on the child he really never thought about before. That is a valid storyform and an important facet of problem-solving to cover.

Joanna is not a good candidate for the Influence Character as the relationship between her and Ted exists in the Objective Story. That relationship about being Ex's is the whole Kramer vs. Kramer part. You want the Relationship Story Throughline and the Relationship it focuses on to be something separate from the OS.

Part of the reason why it seems to take so long in the beginning is because the 2nd Story Driver--the one that comes between the 1st and 2nd Signpost--is only lightly painted. The Decision not to hang out with the boss after the party implies a decision to put Billy before work. Nothing much is made of it. Compound that with a slide from Signpost 1 to Signpost 2 (Doing to Obtaining) and it feels like a very long first Act.

When it comes to the Main Character Growth, you look to what it took to get to the point where a character could change their resolve--not how their resolve changes. With Kramer vs. Kramer it can seem like Ted had to step-up and Start taking care of his son, but that doesn't speak to his problem. Ted's problem was that he was his own worst enemy and he needed to stop focusing on how he was the one always "bringing home the bacon". His life was going great, and then world came and dumped on him and now he had to pick up the pieces. That's the part he eventually lets go. It makes more sense to think of him as a character with a chip on his shoulder, rather than a hole in his heart which is what a Stop character feels like.

The most important revelation last night is something that I'm going to develop into my article for this week. In the analysis Chris mentions that until Ted can let that Concern of the Future go, he will still be stuck with his personal issues. Might not seem like much right now, but I can't stress how important Chris's line of thinking is towards understanding story through Dramatica. Be on the lookout for that article this week.

And then finally, the last notable-notable, was discussion surround the Changed/Steadfast nature of the Relationship Story Throughline--something that is rarely discussed anywhere within Dramatica. And something else I will write an article about in the near future.

Contrast this with a Changed Dynamic relationship where the Relationship Story Throughline is the one thing that would resolve the drive in their relationship--if they were trying to make things more difficult for one another. This isn't what is happening between Ted and Billy in Kramer vs. Kramer.

If you are interested in listening or watching last night's analysis, please visit the Dramatica analysis of Kramer vs. Kramer.