In the book Patterns of Conflict, narrative structure is looked at in terms of feeling. What sort of issues are explored and how does that focus on them feel different than other thematic issues?

Genre, as seen from a Dramatica point-of-view, clues us into the way a story feels. The various arrangements of Throughlines--the Objective Story, the Main Character, the Influence Character, and Relationship Story--carry with them an undeniable je ne sais quois for the story in question. In short, the Domains the Throughlines fall into determine the narrative's unique personality.

Over the summer we're going to have a regular feature known as Throughline Tuesdays.[^1] We will take a popular and well-known film and show you where the Throughlines fall. And like our book on conflict, we will explain our reasoning for why you would find them there.

Hopefully by the end of the summer you'll have a better idea of how to identify these Throughlines in stories and may even be able to begin applying this concept of narrative to your own work. 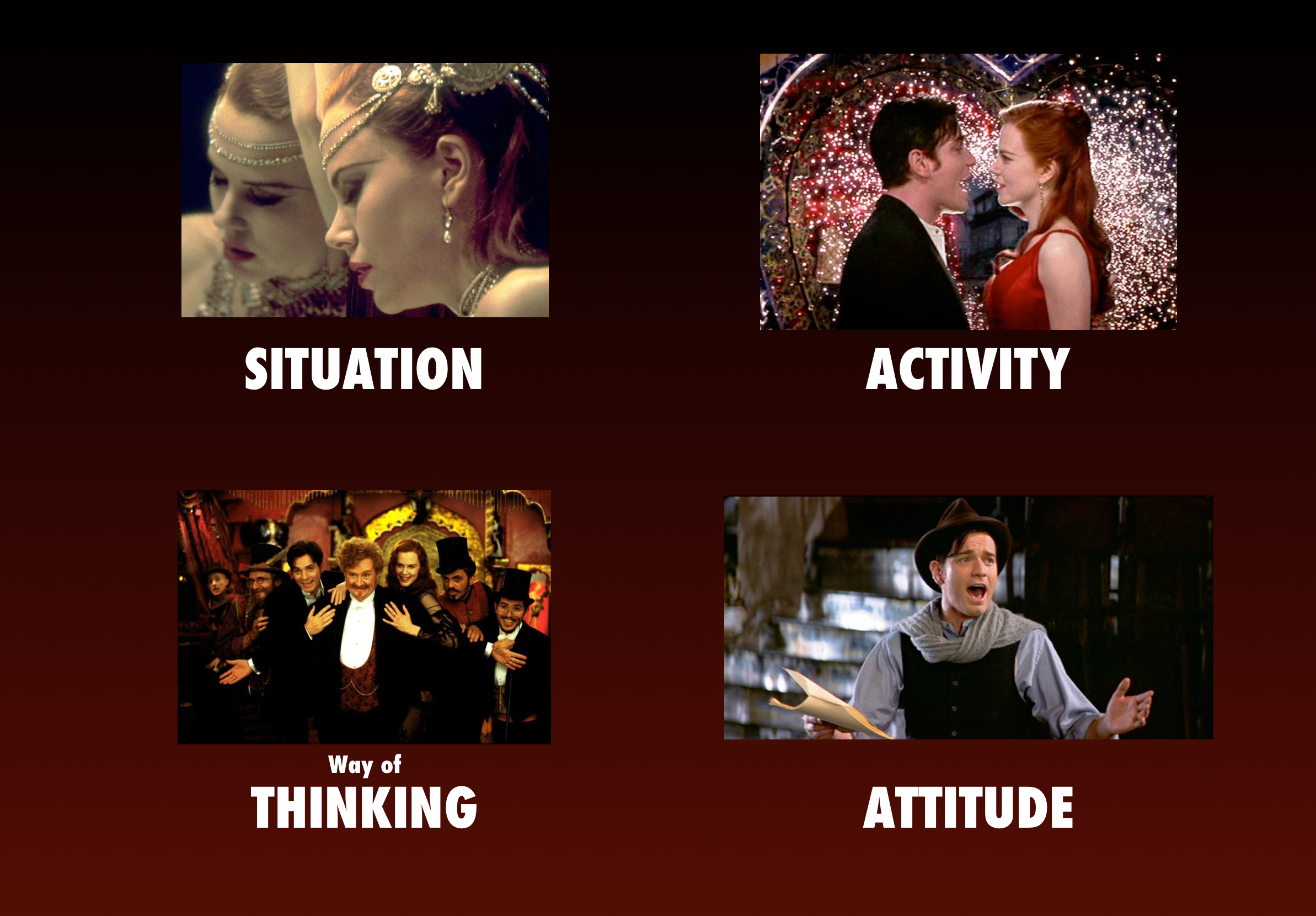 When determining the Domains in which a Throughline falls, always look for the source of conflict. We're not telling a story here, we're identifying the points of conflict for a story.

In Moulin Rouge! the first thing that stands out is the relationship between Christian (Ewen McGregor) and Satine (Nicole Kidman). The singing, the dancing, the sneaking around, and practicing in the dark away from prying eyes...those all identify conflict brought about by Activities. If they stopped doing those things, then the conflict in their Relationship would end.

The next Throughline that stands out is that of Influence Character Satine. Without a doubt, her conflict is that of a bird stuck in a cage or...a Situation. As the most beautiful courtesan at the Moulin Rouge she carries with her a certain elevated reputation. Known to everyone as the "Sparkling Diamond", Satine impacts not only Christian, but more importantly the Duke (Richard Roxburgh). Eventually she becomes the property of the Duke, a change in situation that drives Christian to madness.

And what better place to find the source of Christian's madness but in the Domain of Fixed Attitude. Christian's problem is his one belief, All you need is love. If he could somehow drop such childish romantic notions, then perhaps he could move on and live the life his father wanted for him. But Christian simply can't. He is the Steadfast character in this narrative, and thus holds on to this fixed attitude to the very end.

Finally we find the Objective Story Throughline, the throughline that involves everyone in the story--even Satine and Christian. But here we see them as the courtesan and the writer. The two, along with the theater owner, the money man, the bodyguards, and each and every performer, find themselves locked in dysfunctional Way of Thinking as they attempt to bring back to life the Moulin Rouge! Manipulating the money man and the patrons that attend out of their wealth generates the global conflict in this story.

We will be back next week with an all-new installment of Throughline Tuesdays. Have a great week writing!

[^1]: Though today you'll note is not Tuesday, but a Tuesday for those of us who took Monday off. And an updated note, this feature is now called Throughline Thursdays because, you know, it sounds cooler.