Harry Potter Is Not Luke Skywalker

There exists this notion that Harry Potter and Luke Skywalker are the same character and that they tell the same story: 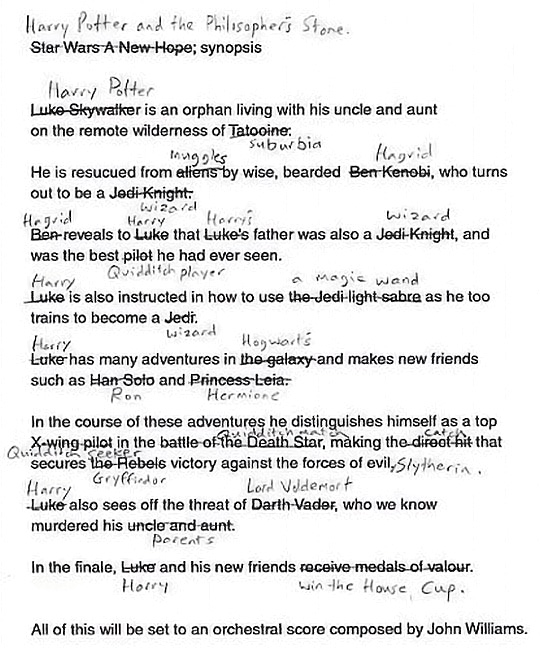 Luke Skywalker/Harry Potter is an orphan living with his uncle and aunt, living a relatively boring life in Tatooine/Suburbia.

He is rescued from aliens/muggles by the wise (and bearded) Ben Kenobi/Hagrid, who turns out to be a Jedi Knight/wizard.

His bearded rescuer reveals to Luke/Harry that his father was also a knight/wizard, and was the best pilot/Quidditch player he’d ever seen.

Luke/Harry is also instructed in how to use a light saber/magic wand, as he too trains to become a Jedi/wizard.

In the course of these adventures, he distinguishes himself as a top pilot/seeker in the battle of the Death Star/Quidditch match, making the direct hit/catch that secures the Rebel/Gryffindor victory against the forces of evil/Slytherin.

Luke/Harry also faces the threat of Darth Vader/Voldemort, who we know murdered his uncle and aunt/parents.

In the end, Luke/Harry and his new friends receive medals of valor/win the House Cup.

All of this will be set to a magnificent score composed by John Williams.

This ridiculous meme is yet another silly attempt at reducing the complexities of narrative down to simple wish fulfillment and mythology. Popularized by accomplished actor and writer Stephen Fry and spread throughout the galaxy by mthyos-fanatics everywhere. For the one-hundredth thousand time, Not Everything is a Hero's Journey. Yes, there are some stories that follow monomyth structure but they represent a small sliver of the potential fully functioning narratives out there.

Harry Potter is nothing like Luke Skywalker and Luke Skywalker is nothing like Neo in The Matrix. These reductionist methodologies stymie the growth of real discussion surrounding the complex process of narrative by focusing on the storytelling of a work, not the actual form of the story. It is the same level of madness that fuels the useless notion of the trope. Of course you can substitute any proper noun for another the same way you can substitute ham on rye for pastrami and Pepsi for Coke—none of it actually means a thing.

Luke's biggest problem is his drive to continually test himself against any obstacle that gets in his way. It is a huge problem for him and gets him into trouble time after time. Harry doesn't have this problem. Instead, the young Mr. Potter finds himself saddled with an overabundance of ability; that is to say—he can do things many of the other kids cannot. It sets himself apart from the others and widens the isolation he already feels as an orphan.

Characters with problems of test can only be resolved by trusting; characters with an overabundance of ability can only be resolved by an equally abundant amount of desire, i.e. they will need to feel wanted. Luke had plenty of people that wanted him, it didn't do anything for him. Harry had friends and colleagues who trusted him and that did nothing for him. These are two completely different characters on two completely different personal growth throughlines. To suggest that they somehow are one and the same only marginalizes the work that went into producing them and bastardizes the art of storytelling.

It is very important that writers and producers find the actual story element that produces the inequity within a character. Only then can they be sure to resolve their story the way it needs to be resolved. Anything less is pure fantasy and conjecture.