Beasts of No Nation and Throughline Thursdays

Throughline Tuesdays have been a popular addition to the site here, but it didn't take long before one of our mentor clients pointed out to me that I was missing out on a great alliteration opportunity--Throughline Thursdays! So I'm moving the feature to later on in the week. This clears up some time for the podcast and for our new weekly feature next week--EleMondays!

That's right--in addition to taking a look at the Throughlines of a particular story, I'll take time out each week to look at the Problem/Solution/Focus/Response quad at the bottom of a Throughline. This group of four Elements is an essential part of every Throughline as it motivates everything that works above it (Issue, Concern and Domain). If some of this seems confusing, don't worry--I'll try to clear it up more next week when EleMondays starts.

For now, onto this week's Throughline Thursday...

Beasts of No Nation is a tremendous film that didn't receive the kind of recognition it deserved. If you saw the first season of True Detective and loved the directing style, you will absolutely love Beasts (same guy). 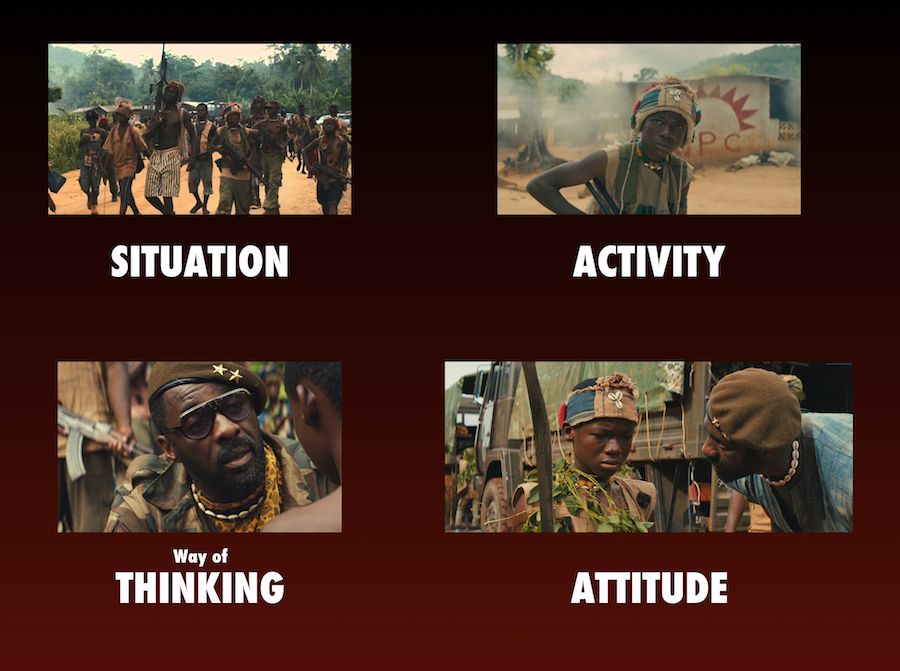 At first, one would think to find Main Character Agu (Abraham Attah) in Situation. After all, he is orphaned at a young age and forced to engage in a brutal and ruthless African civil war. But he is not the only one.

This is the key to identifying the Main Character Throughline: Find the problem and conflict unique to the Main Character that no one else deals with, or at least no one we see deals with. Through Agu's eyes we get to see and feel what it is like to engage in all these awful and morally comppromising Activities. The scene on the bridge is a disturbing, yet important, key to the development of his Throughline. As an Audience member we are Agu, engaging in violent behavior.

Contrast this with everyone else in the story and you will see that the Objective Story Throughline is one dealing with a Situation: the state of a nation locked in civil war, turning to children to accomplish their goals. Here, the film doesn't look to the activities of these children as the source of conflict as much as it does look to their indentured servitude as soldiers. No one gets out. And no one can leave.

One too would be tempted to see the relationship between Commandant (Idris Elba) and Agu as one of Manipulation or a Manner of Thinking. But Commandant manipulates everyone. If there ever was a shining example of an Influence Character Throughline of Psychology or Way of Thinking it would be the Commandant. The power he exerts over these children to kill for him and to do unspeakable things for him influences and challenges Agu to examine his own despicable activities.

This leaves the Relationship Story Throughline in Fixed Attitude. Certainly, with the loss of his father, Agu looks to the Commandant for a fatherly relationship. This worship and unquestioning loyalty lies at the heart of their relationship and fuels the love and eventual distrust and hate that builds between them. The final scene where Commandant looks to Agu to affirm their relationship and the roles they play in each other's lives speaks to this problem of what they think creating conflict.

When it comes to identifying the Throughlines of a story, a tender balance must be struck between each of the four perspectives. While it could be possible to see Agu in a Situation, trying to force the Commandant into a Fixed Attitude Domain seems an unlikely and troublesome fit. He is not one for Memories nor quiet Contemplation as a character in that Domain would.

For every complete narrative, there will always be one arrangement of all four that simply feels better. Developing this intuition is key for a writer wanting to explore all aspects of conflict through narrative.