The secret to success lies in a consistent use of the Four Throughlines of narrative.

In their first fifteen years, Pixar Animation Studios has managed to provide the world with ten monumentally successful films. Not only have they easily won their respective box office returns, these films have also won the hearts of audiences both young and old. Everyone loves a Pixar film.

The voice talent is unique and inspired, the character design rocks massive appeal, and the animation (particularly in Ratatouille) fans the flames of magic first ignited within the classic Disney animated films of the mid 20th-century.

But there is one ingredient that towers paramount over all of these.

A Matter of Perspective

Most everyone who delves into the complicated world of storytelling eventually comes to the realization that in the end, stories are about solving problems. The concepts of story – character, plot, theme, and so on – were all developed as a means to communicate the appropriateness (or lack thereof) of the approach used in solving those problems. When done properly, an audience is provided with meaning. 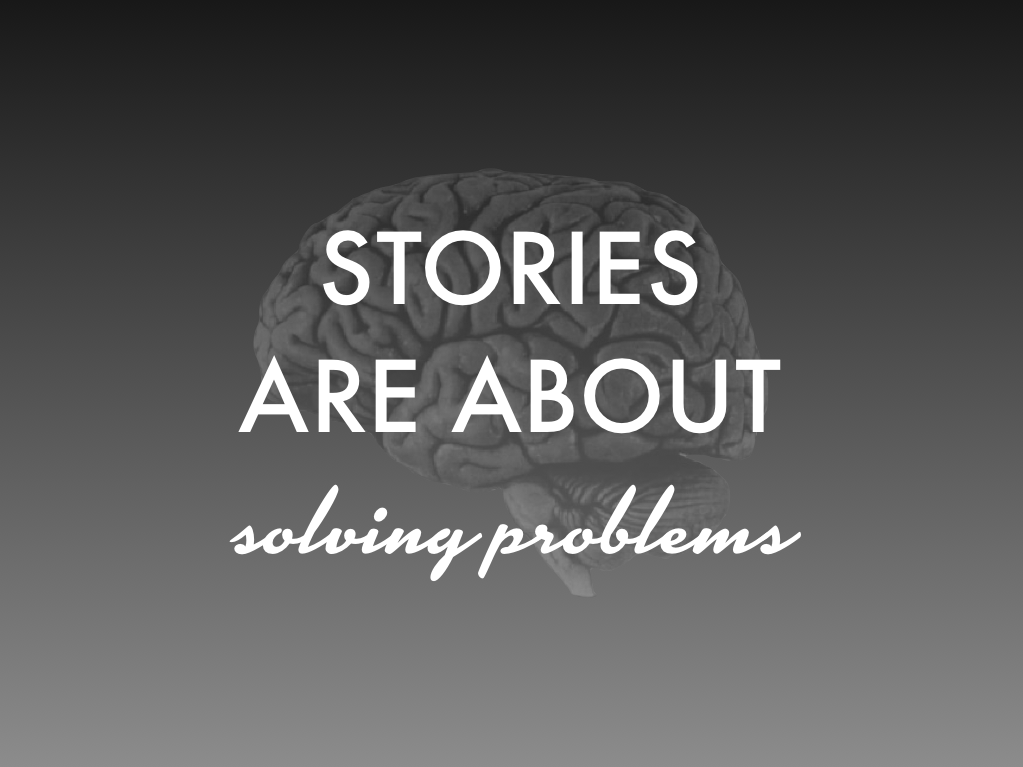 All meaning is derived from context. The idea that “one man’s trash is another man’s treasure” is based on the chasm that exists between two opposing contexts. I may see the world differently than you, but from my perspective I am right. Likewise, from where you stand the way you see the world is correct. Meaning depends on the perspective we take.

In our view of ourselves, we can take the I perspective and see what it is like to personally have a problem. We can also see a viewpoint opposite from ours (the You perspective) and have a relationship with others as well (the We perspective). But we cannot step outside and look at ourselves objectively. It’s an impossibility.

Conversely when we look at others, we can view them objectively from the They perspective, we can have a relationship with them (the We perspective), and have an opposing view to theirs (the You perspective). But we cannot be them. We cannot simultaneously be both objective and subjective.

If you take the central problem in a story, you can see how that problem would appear different depending on what perspective was taken. The approach one character takes may seem an appropriate way to solve the story’s problems while completely inappropriate to another character. It’s only once we examine the central problem from all four perspectives that we are finally able to comprehend some truth to the matter and thus arrive at some greater meaning.

This is why stories have such a profound effect on us and why sometimes you can’t help but read or watch the same stories over and over again. Stories offer us something we cannot get in real life, namely - meaning. When a story covers all four perspectives at once, it effectively has made a complete argument that an audience will be powerless to ignore. They’ll have nothing to say because all the bases have been covered.

So how does a story go about exploring these four perspectives?

The Big Picture Throughline. This throughline is what most consider the main story, the plot, or if you prefer, the A-story line. A majority of screen-time is spent telling this throughline (at least in American cinema). This is the part of the story you describe when you’re asked, “What was the story about?” From here, the audience gets to see the central problem from a bird’s eye objective view.

The Personal Throughline. This throughline concerns itself with who the story is about. Most story experts agree that a successful story revolves around one central character, most often referred to as the Main Character. This throughline is also sometimes called the B-story line. From here, the audience gets to experience the central problem from a completely subjective personal viewpoint.

The Opposition Throughline. This throughline provides the opposing viewpoint necessary to force the Main Character to deal with their own issues. Most accurately referred to as the Influence Character, this character has also been labeled the personal antagonist. From here, the audience gets to experience a personal viewpoint of the problem that is not their own.

The Relationship Throughline. This throughline is the heart of every story. It concerns itself with the relationship created between the Main and Influence Character and whether or not that relationship is growing or dissolving. From here, the audience can gather some emotional meaning from the problem unavailable in any of the other throughlines.

Incomplete stories exist when one of the throughlines is missing. When the Relationship Throughline is missing, you have a story without heart. In Monsters vs. Aliens, the Main Character Susan is left to deal with her personal problems on her own. Because of this, her change at the end seems forced and unbelievable. Main Characters need that Influence Character to help draw them out. Towards the beginning of the film there is a scene with Dr. Cockroach that seems like the beginning of a Relationship Throughline, but it is not followed through with. 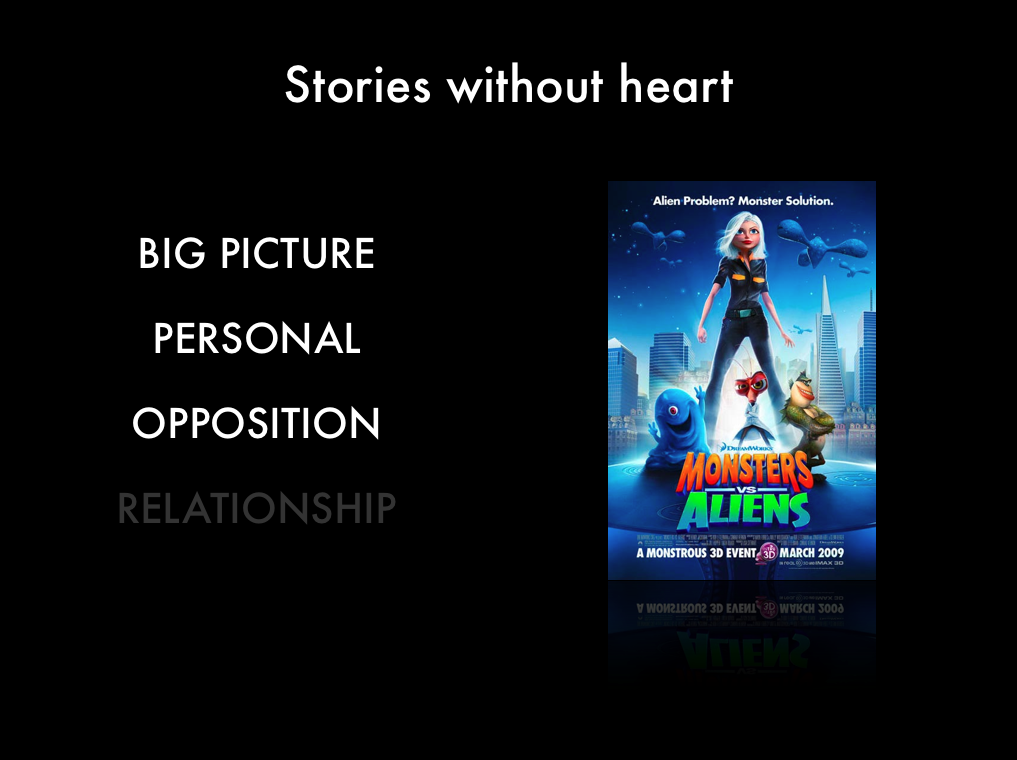 This missing throughline is the primary reason for the poor performance of this film overseas. Audiences outside of America love stories with heart. Don’t give it to them, and they won’t show up. 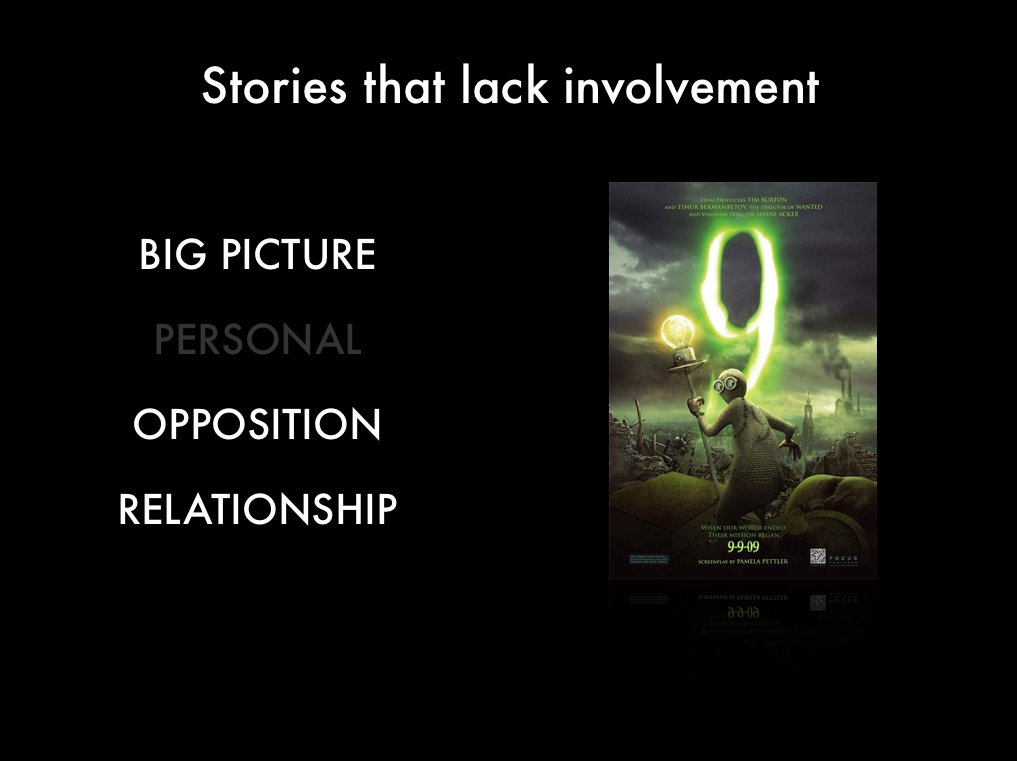 When the Personal Throughline is missing, you end up with a story that is cold or uninvolving. In 9, we never learn who “9” is or what emotional baggage he brings to the story. This is why it becomes difficult to become emotionally involved with the film. Storytellers must provide this gateway into a story less they risk an audience checking out.

What if you leave out the Big Picture Throughline? In film, it is virtually impossible. Novels, not so much. The book version of Twilight suffers from an underdeveloped Big Picture Throughline. We know a lot about Bella, and Edward and their budding romance but we don’t know anything about the big bad vampires until 3/4 of the way into the story.

This is why most men will toss the book aside after twenty pages or so. When you leave out the Big Picture Throughline, you end up with stories that don’t make sense. This is also why, in the movie version, they sprinkled in bits with those three baddies from the very beginning. You need to have a sense that a story is going to make sense if you want to retain male viewers. Having a Big Picture Throughline goes a long way towards making this happen.

Complete stories are stories in which all four throughlines are present.

There are occasional exceptions to the failure of incomplete stories. This year we’ve been treated to three entertaining movies that fell short of supplying us with a convincing argument. Taken had neither the Opposition Throughline nor a Relationship Throughline. That’s OK, because the purpose of that film was to show Liam Neeson kicking ass throughout Europe, not provide audiences with some deeper meaning. 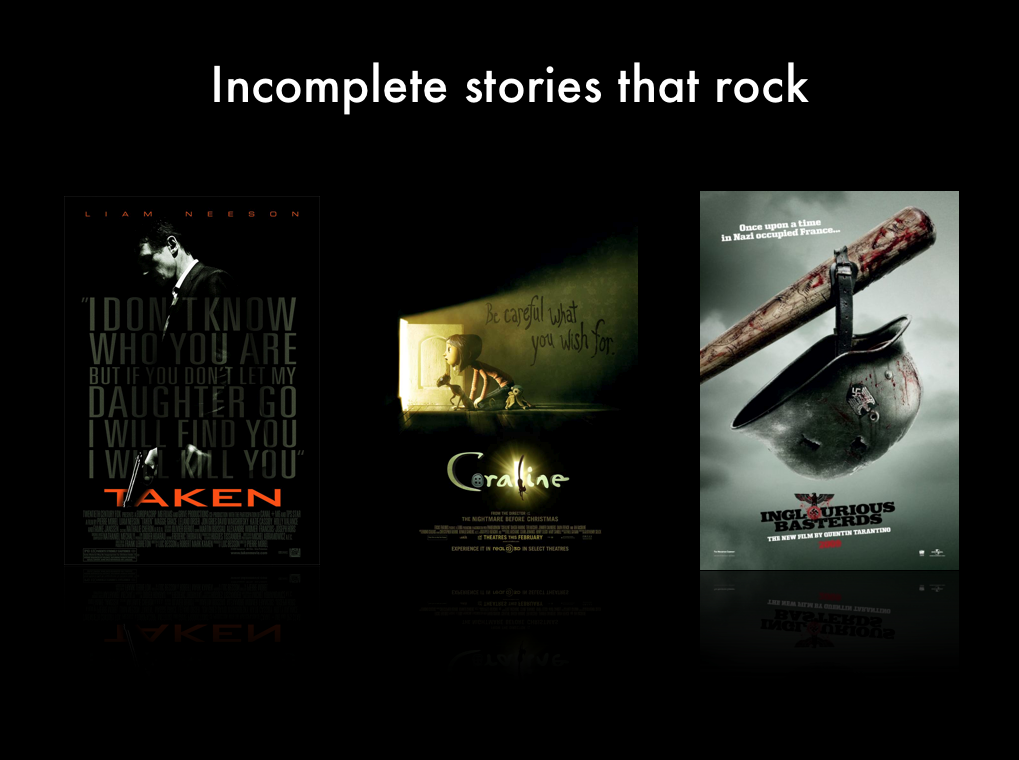 Likewise, Inglorious Bastards from Quentin Tarantino missed the mark in the complete story department. The entertainment value that came from the uniqueness of the subject matter and some captivating performances superseded the audience’s need for some greater understanding..

And finally, Coraline wasn’t trying to be anything more than a beautiful tale (there is a difference between a tale and a story). If you’ve seen the film you know there’s a scene towards the end that seems to come out of nowhere. Coraline’s mother, constantly distracted by the pressures of her career, brings home a gift for her daughter. It feels like the right thing for her to do, but at the same time it feels awkward as she never really grew to that point. If they had developed the relationship between Coraline and her mother more (i.e., a Relationship Throughline), the story would have meant something more than simply beautiful character design and technically superior animation.

But they didn’t, and the box office languished because of it.

Films suffer when a throughline is missing. Luckily, there is one studio who understands that.

As mentioned above, sure, you can get by with an incomplete story if you have fabulous production design, but you’ll always be doing just that: getting by. Audiences crave meaning. It’s why they go to movies and why they cherish the films they do. And you don’t have to look much further than Pixar Animation to find films that people cherish. 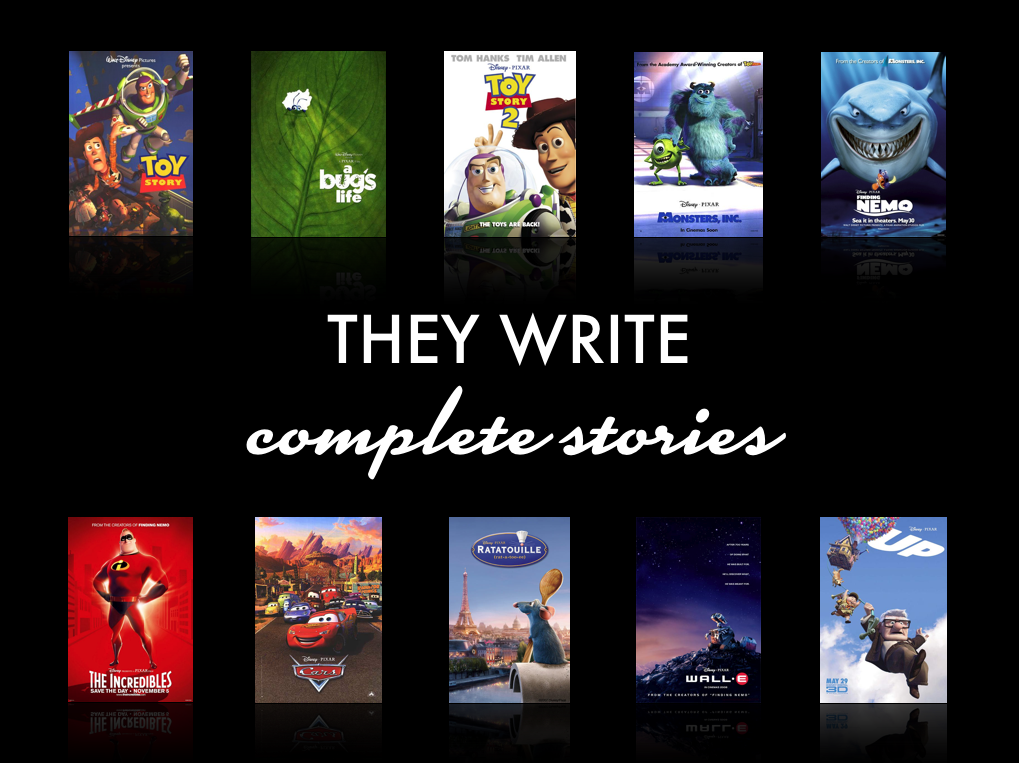 Of the ten films produced at that studio in the last fifteen years, each and every one has a full and complete story. All four throughlines are present in each film. In fact, the greatest of them all, Finding Nemo, actually has two complete stories in it! We have the father/son story that focuses on, well, finding Nemo, and we have the secondary story with Nemo and Gil in the aquarium. The latter is less defined than the former, but it is still treated as a complete story. It’s why the film feels so “full.”

When reviewing a Pixar film, critics overwhelmingly point out the abundance of heart. This is because every single film has a meaningful relationship at the core. Woody and Buzz, Bob and Helen, Sully and Boo, Wall-E and Eve – these are all classic heart-felt relationships that will be remembered by audiences for years to come.

In addition, every film focuses on one central character from which the audience can experience the story. Cars has Lightning McQueen and Toy Story 2 has Woody. And every film has an opposition character that forces the Main Character to deal with their issues. Lightning has Doc, Woody has Jesse.

The presence of these four throughlines explains why audiences (particularly children) can watch them over and over again. They’re getting something out of it that they can’t get in real life. They’re gaining meaning from solving problems both objectively and subjectively. When life seems pointless or confusing, these films can help supply comfort or greater understanding in the form of meaning.

And that’s all there is to it.

As the world of fiction grows more fragmented and people become more and more distracted by the meaningless, the need for complete stories becomes apparent. If a writer wishes themselves to be heard and to have a profound effect on those who experience their story, they will have to provide them with a complete argument. Anything less, and those long hours at the keyboard will simply become fodder for the refuse pile that is Tweets and YouTube clips.

Audiences want complete stories. It’s up to the authors of the 21st century to make it so.

→ Next
Redefining Protagonist and Main Character