Understanding the True Motivations of Your Characters

Moving beyond morality to determine drive.

Many look to notions of good and evil to determine the relative morality level of their characters' motivations. The "good guys" are the characters we care about, the "bad guys" are not. Subjective appreciations like this will always steer the Author wrong when it comes to developing integrity within their stories. And Audiences flee when you break that trust.

The Protagonist represents initiative and is comprised of the narrative elements Pursuit and Consider.

The Antagonist signifies reticence and is comprised of Avoid and Reconsider.

These elements were also defined in the context of the Storymind: a complete story is an analogy to a single human mind working to resolve an inequity.

In Spider-Man: Into the Spider-Verse this inequity is the introduction of the Large Hadron Collider, the machine Kingpin hopes will bring back his family. Removing this machine from the current universe will resolve the inequity of the story and bring balance back to the Storymind.

Miles pursues and considers a means to remove this machine.

Kingpin avoids, or prevents, and reconsiders the means to remove the machine.

Miles is the Protagonist and Kingpin is the Antagonist.

Their conflict exists because they represent motivations at cross-purposes to each other within the mind. One for resolution, one against.

Two other Players serve an essential role on both sides of this conflict: Peter B. Parker the “hobo” Spider-Man, and Miles' Uncle Aaron.

At first glance, it may be easy to cast Peter B. Parker (Jake Johnson) the “hobo” Spider-Man on Miles’ side and Uncle Aaron (Mahershala Ali) on the side of Kingpin. After all, Uncle Aaron works for Kingpin and Peter eventually mentors Miles.

But there’s something about both those considerations that don’t quite sit right within the Storymind.

Running Against the Grain of the Expected

While at times Peter seems driven to pursue the same Goal as Miles, he does mess things up at times. Eating cheeseburgers and apologizing to the wrong Mary Jane delays the successful resolution of removing the machine. 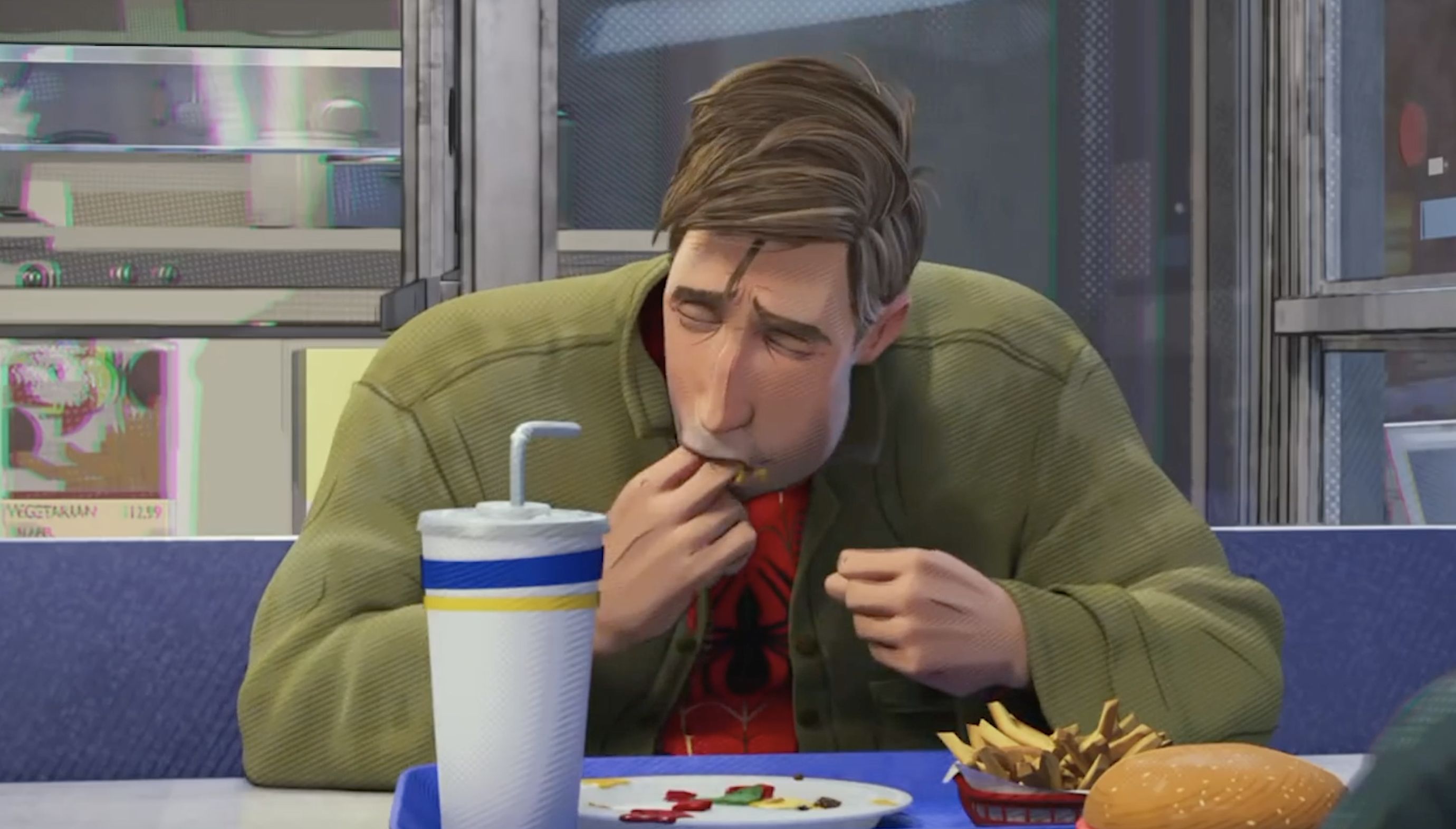 Peter B. Parker Doing What He Does Best

Same with Aaron on the other side. As The Prowler, Aaron chases Miles down in the street and destroys Aunt May’s house, but when the moment of truth arrives the "bad guy" can’t finish the job of killing his nephew. Aaron wants something better for the boy and actually gets in the way of Kingpin, making it ultimately more accessible to destroy the machine.

What forces then do Peter and Aaron represent in the Storymind?

And why do they seem so wonderfully complex?

The Forces of Conscience and Temptation

Like the little angels and devils that used to sit on the shoulders of Donald Duck back in the day, the forces of Conscience and Temptation influence and challenge the powers of Initiative and Reticence.

Less “doing the right thing” and more thinking about the consequences, the motivation towards Conscience naturally sits on the side of the Protagonist. Goals do not exist without consequences, and the conscience constantly reminds the Storymind of what could happen if the inequity is not resolved.

Temptation, on the other hand, ignores the consequences. Not as forceful or impactful as the clear-cut motivation towards reticence, temptation disrupts the course of action towards resolution—tempting the mind towards other considerations.

Appreciating these dual forces from the context of a mind seeking to resolve an inequity, it is clear that Conscience helps those efforts while Temptation hampers, or hinders efforts.

The Archetypal Force of Conscience

As with the perfect combination of Pursuit and Consider within the Archetypal Character of the Protagonist, the dual motivations towards Conscience and Help combine to form a different Archetypal Character naturally. The Dramatica theory of story refers to this character as the Guardian. Often portrayed as a helpful teach or kind mentor, the Guardian aids the Protagonist in the successful resolution of the inequity.

Morpheus in The Matrix. The enigmatic S.R. Hadden in Contact. Obi-Wan Kenobi in the original Star Wars. These Guardians act as the voice of Conscience while helping their respective Protagonists resolve the conflict.

The Archetypal Force of Temptation

Death Vader in Star Wars. The charismatic David Drumlin in Contact. Cypher in The Matrix. These troublemakers disrupt the efforts to resolve the conflict by appealing towards the mind to ignore consequences.

They don't stop resolution—they just delay it by getting in the way.

Note the balance between Help and Conscience and Hinder and Temptation. Like Pursuit and Consider, Avoid and Reconsider, the Storymind addresses all sides of the argument when in the process of resolving the conflict.

Balance on Both Sides of the Argument

This tendency towards balance within the mind led the creators of the Dramatica theory of story, Melanie Anne Phillips and Chris Huntley, to coin a new name for this Archetypal Character: The Contagonist. One part Temptation, one part Hinder, the Contagonist disrupts efforts towards resolution on both sides of the good guy/bad guy fence.

Consider Darth Vader’s Force Choke of Admiral Motti in the first Star Wars. Or the Dark Lord's idea of using a homing beacon onboard the Millennium Falcon, rather than straight capture. These actions and decisions get in the way of the Empire’s clear-cut motivation to prevent a rebellion. Sure, the beacon pays off—but not after a few hapless TIE-Fighter pilots play out their role.

The Narrative Elements of a story exist within the context of the Story Goal—not with their “good guy” or “bad guy” affiliation. This is why you find Complex Protagonists and Complex Antagonists in films like Michael Clayton or How to Train Your Dragon.

Karen is the Protagonist of Michael Clayton. Michael is the Antagonist.

Hiccup (Jay Baruchel), a “good guy,” prevents efforts to train the next generation of dragon killers. His father Stoic (Gerard Butler), as misguided as he is in the eyes of the Author, pursues that successful resolution.

Hiccup is the Antagonist of How to Train Your Dragon. Stoic is the Protagonist.

The development of an argument requires the Author to step back and take an objective point-of-view of the play at hand. Who moves forward? Who pulls back? Who gets in the way of resolution, and who helps? Where are the voices of Conscience and Temptation?

Subjective attribution colors and distorts this balanced and considered approach. Notions of good and evil, light and dark, mask the very truth on display. Unable to see a clear picture of the forces at work, the Author breaks the integrity of the argument and loses the Audience’s trust.

There is balance within the mind.

There is balance within the Storymind.

Take this objective perspective of character motivations with the Story Goal the next time you develop a story. The experience will help you gain perspective and balance in your own work.

Building Interest by Embracing the Unexpected

Embracing this approach brings us back around to the discussion surrounding Peter B. Parker and Uncle Aaron. If they both represent alternating halves of the same Archetypal Character, how can you possibly classify their role within a story?

There's no doubt they work within Spider-Man—the scenes involving two are always the most entertaining and the most engaging.

And the reason for that lies in this essence of character that works against the expected perfect alignment of Archetypal Characters.

These two characters approach something much more Complex.

And for that, we refer to them as Complex Characters.