The Three Essential Components of Every Storypoint

Making a meaningful connection between Author and Audience

If a complete story is an analogy to a single human mind working to resolve a problem, then a Storypoint is a bridge between that mind and the Audience engaging with it. Describing the totality of that mind all at once is an impossibility—especially with the format of a novel or film, where information trickles out at a snail’s place. Maintaining the integrity of that initial problem is the responsibility of the Author—the Storypoint their turnkey.

A Storypoint consists of three parts:

Scan the analyses in Narrative First to find examples of these three in action. A Main Character Problem of Non-acceptance. An Objective Story Concern of Understanding. An Influence Character Signpost 2 of Preconscious. All of these reflect particular Storypoints from their respective Storyforms.

The Throughlines signal Perspective. The Appreciations identify how to “appreciate” this particular instance of storytelling. And the Methods indicates the functions by which the narrative moves through the Storypoint. 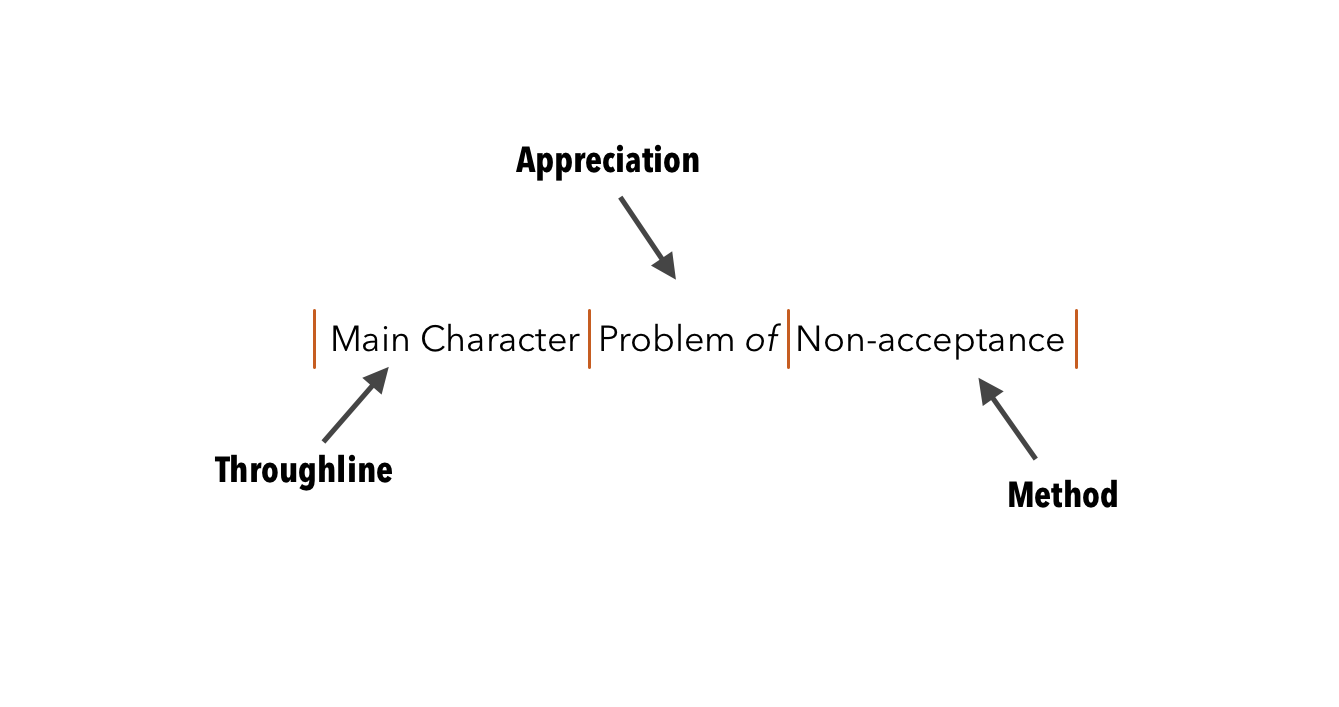 Authors that write with purpose write to communicate more profound meaning. A story about the ills of over-emotionality strikes a different chord than the one about the failings of inertia. The Godfather describes the former with its Objective Story Problem of Feeling, while Snowpiercer reflects the latter with an Objective Story Problem of Inertia. In each, the Method of either Feeling or Inertia drives the cognitive process of the Storymind.

The purpose of the Four Throughlines is to communicate perspective. What does this part of the stoy look like from here? How does this other one look from over there? Our minds appreciate conflict from four different points-of-view; the Throughlines function as proxies to these perspectives:

Planes, Trains, and Automobiles conveys a Main Character Problem of Non-acceptance. Neal Page (Steve Martin) rejects anything and anyone that gets in his way. As an Audience member, we experience this conflict from the inside—from a first-person personal point-of-view.

The Appreciation offers the way by which an Audience member may appreciate the Author’s message. While not the typical parlance of storytellers throughout history, the Appreciation nevertheless imparts the writer’s sole purpose for being in the world: to communicate with intention. As an Audience member, we seek to appreciate another’s point-of-view. We understand the message only to the level with which the Author effectively communicates these various Storypoints.

The Others and The Sixth Sense both explore an Objective Story Concern of Understanding. What is going on with this young boy? and Why is this family acting so strangely? The Concern of a Throughline allows the Audience the opportunity to focus in on one particular area of conflict. These films are not about the Future, or about Conceiving, they explicitly set out to mine difficulties in Understanding. By setting Understanding as the Objective Story Concern, the Audience appreciates problems of understanding from an objective third-person point-of-view.

The Method singles out a single cognitive process within a complete story. We know what it means to Avoid, to Control, to have Faith, and be driven by Temptation. We recognize imposed Expectations and the inability to Trust. And we see the difficulties inherent in false Perceptions and the strife engendered by refusing to lean towards greater Acceptance. The Method is the function by which that thematic conversation moves through a story.

Elf, Leave No Trace, and Star Wars all exhibit an Influence Character Signpost 2 of Preconscious. In Dramatica, the Preconscious refers to the state of mind already present before Conscious thought enters the picture—it represents the seat of awareness. In each of these films, the Influence Character challenges the Main Character through the Preconscious. In Star Wars, Ben suggests that Luke train with the blast shield down, and rely solely on instinctual awareness. In Leave No Trace affected war-veteran Will moves daughter Tom to action with his inability to shut out awareness of helicopters buzzing overhead. And in Elf, father Walter Hobbs challenges Buddy to double-down with a complete lack of instinct for the Holiday season and spirit.

The storyform is The Veil Between Author and Audience; the Storypoints pinholes in that black construction paper between work and appreciation. The Storypoint connects the process of writing a story with the experience of appreciating a new perspective. Understanding the three components of a Storypoint allows the Author the opportunity to connect more deeply with the Audience.