The Science of Storytelling

The Dramatica theory of story is the most comprehensive understanding of our need to tell stories.

Monumental leaps in understanding herald the progress of man. Fire. The wheel. Indoor plumbing. Dramatica. The latest development in our understanding of narrative has the potential to improve things far better than the ability to cook our meat.

Some, however, would prefer to stay in the past. Author and USC Adjunct Professor Gene Del Vechhio had this to say in his article on "The LEGO Movie and The Science of Storytelling":

The success of The Lego Movie is science first and foremost, masterfully brought to life with artistic flair. How do we know this? Because Aristotle told us so over two thousand years ago.

Yes, Aristotle started this whole narrative as a science gig. And yes, Campbell and Vogler built upon that foundation with their interest in Hero's Journeys. McKee and Snyder took it one step further by making all that palapable and marketable to an otherwise distracted culture. But what of the next evolutionary step?

Del Vechhio falis to mention the Dramatica theory of story. Billed on its website as the "Next Chapter in Story Development", Dramatica surpasses these rather introductory examinations of narrative. If Aristotle was Kindergarten (and really, it is), and if the Hero's Journey was elementary school and Save the Cat! junior high, then Dramatica is the PhD of storytelling. Steeped in human psychology rather than observed movie references and audience research, this giant leap forward in our collective understanding can significantly improve the quality of storytelling.

Examine, if you will, this Periodic Table of Story Elements: 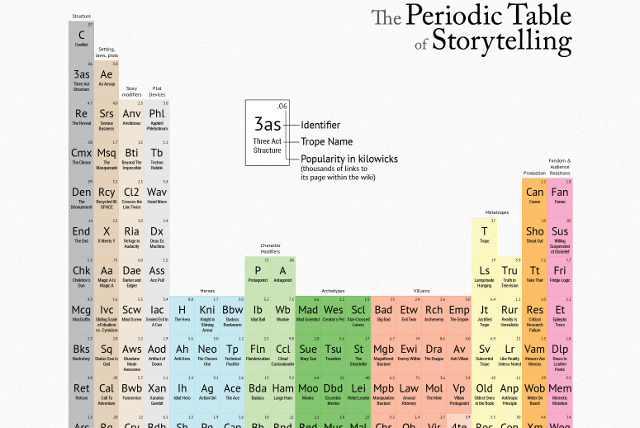 The Periodic Table of Storytelling

This is not Dramatica. Combining ridiculous "tropes" like the MacGuffin and Adventurer Archelogist into a single chart, this chart attempts to pass popularity as science.1 The chemical "base" and position of each item on the chart identifies nothing more than the number of links pointing to the element. Disregarding the relative cynicism and uselessness of a trope itself, what value does the commonality of a storytelling device hold? Is one supposed to insert a Genre Savvy character because it carries more "kilowicks" than the Jerk with a Heart of Gold? Or is one supposed to avoid this character because everyone is doing it?

The chart is pointless.

Compare this with Dramatica's Table of Story Elements: 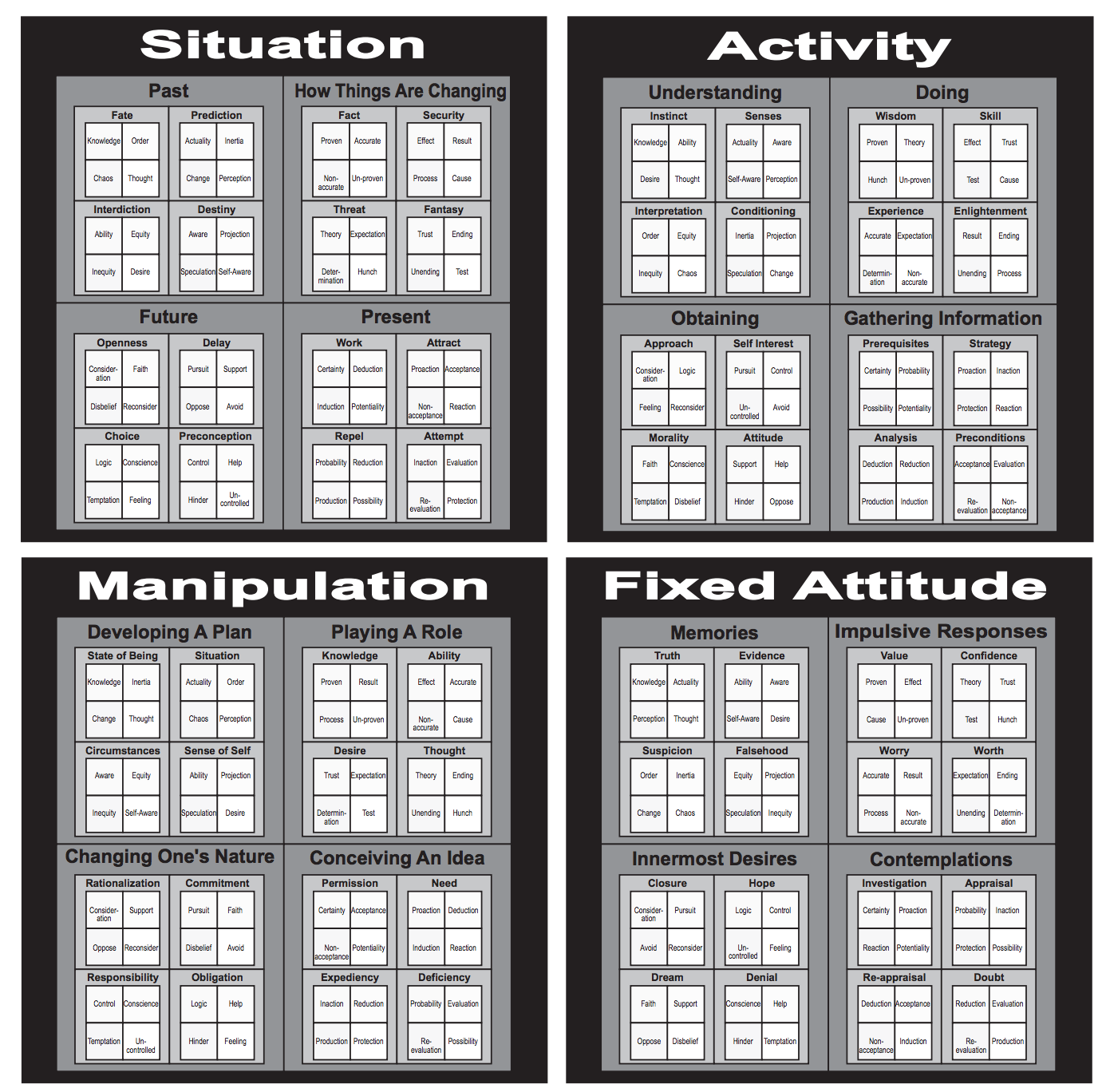 The Dramatica Table of Story Elements

Not as pretty, but 5,000 times more useful to a writer. And less cynical. The Dramatica theory of story doesn't say it has all been done before. The Dramatica theory of story says there are thousands of different ways to craft a story's argument. Pick one and let your creativity determine how to present it, regardless of what has come before. Leave tropes for the less imaginative.

Dramatica's chart helps a writer balance out their argument so it doesn't feel one-sided. The position of each and every element holds significant meaning, especially in relation to the elements around it. It's no coincidence that the relationship between The Past and Situation matches the physical relationship between Memories and Fixed Attitude. One can find comparisons like this throughout the entire chart becuse high level math exists beneath all of them. Tangent, co-tangent and secant? Dramatica relies on real science and real math like to help pull these appreciations of story together.

Contrast the sophistication of Dramatica's understanding to that of the Hero's Journey:

The narrative should begin, they say, by immersing the audience into the hero's world, having the hero receive a call to adventure, making him first refuse the call, allowing him to then meet a mentor who convinces him to follow the call, and so forth.

Storytelling conventions masquerading as science. No relationship from one beat to the next and no explanation as to why they operate.

Act One runs 30 miuntes...Act Two should run 60 minutes...Act Three should ideally run another 30 minutes...This time-based storyline blueprint has proven over time to be critical because each Act is segmented in a way that keeps the audience's attention, making the story not too long nor too short.

Audience attention? That's a highly subjective analysis and open to all kinds of interpretation. Dramatica, on the other hand, has a very objective and reasoned explanation why stories have four major movements, or Acts.

Referring to the chart above you'll see on one level the story appreciations of Obtaining, Doing, Learning and Understanding. Each of these represents a different way of examining an Activity. When making an argument (or delivering a "message"), competent writers need to address all the different ways their characters can go about solving their problems. Once each has been dealt with, the story is over. Why go back and cover ground that has already been covered?

That's why there are four Acts.

In a recent radio interview, physicist Brian Greene had this to say about his particular area of research:

physics...many people think of it as some subject that they are forced to take in high school and they're so thrilled when they finish it because then they can forget about the whole thing,...but that's a sort of tragic perspective...physics is a way of understanding reality, of engaging with the world, of making sense of your own existence in the deepest possible way.

Dramatica makes sense of that feeling by giving an understanding of the dynamics at work in "the deepest possible way."

A lot of times I'm asked "Oh, how can I fit my story into the Dramatica template?" or "I don't know if I can come up with the 28 scenes Dramatica says has to be in every story." First of all, Dramatica theory doesn't say every story has to have 28 scenes--thats a misunderstanding from the theory book. Secondly, and more importantly, there is no real Dramatica "template". Stories don't fit into beat sheets or waypoints along a journey--it's the other way around. Dramatica gives us the chance to look at story and understand what is truly there.

In that same radio interview, Brian Greene had this to say about evolutionary understanding:

even Einstein himself knew he was taking an incremental step forward, giving us a deeper understanding of space and time and gravity. But he knew it wasn't the end of the story because the way physics and science in general works, people understand something in one era and then in a later era they expand the understanding. They typically don't wipe out what happenend in the past. Newton is still with us..and its good...because its a close approximation to the truth...but Einstein did a better job....and ten, hundred years, somebody else is going to do a better job still.

This evolution was the point of Del Vecchio's article, but instead of detailing the latest and greatest, he relied the well-traveled. Aristotle was a close approximation, nothing more. Analyze the Greek's groudbreaking concept of "beginning, middle and end" against Dramatica's Main Character Unique Ability. One illustrates a key ingredient for matching character to plot, the other only aids in writing the Table of Contents.

Do you ever wonder why a Main Character is even in a story? Was it some random decision the Author made? It could be. But the only way that character becomes an integral part of a story is through the employment of their Unique Ability. This concept ties the Main Character into the larger Objective Story that everyone is concerned with. It gives him or her the ability to bring a successful conclusion to all the problems everyone is facing.

As a deeply connected man in possession of letters of transit, Rick finds himself in the unique position of being the only one able to bring the problems of Casablanca to an end. This Unique Ability of Closure ties him into the story, making him the Main Character. And what of Batman/Bruce Wayne's Unique Ability of Threat in The Dark Knight? The only way someone could save a city like Gotham would be if they represented an even greater danger than the psychotic criminals they hope to overcome.

Now, knowing that this concept of narrative exists, do we really want to return to the Stone Age granted to us by Aristotle??

A Call for Progress

One last quote from Brian Greene in regards to math:

math is a lnaguage that many of us are less familiar with. [It's a] language optimally suited for analyzing a certain class of problems

Bad stories exist. Trust me, I've worked on more than one. They're a real problem for many who work in the film industry because so many give their life and soul to what ultimately is a forgettable and pointless story.

Dramatica presents a language optimally suited for analyzing the problems inherent in story. What's more, it provides a scientific framework for quickly and adequately resolving those problems. It can be frustrating and overwhleming at first, but after years of study and the gaining of familiarity one begins to see story in an entirely new light. In a way, learning Dramatica helps authors develop their story sense.

The Weekend of Dramatica assists this process: helping writers from all walks, whether they be filmmakers or actors or writers, to better understand narrative and condition themselves to spot those problem areas.2 Knowing Dramatica is like having a powerful and prescient tool to help cut through the murk of constant rewrites and disappointing drafts.

Like most foreign languages Dramatica can be quite a challenge at first. There will be moments here and there where things will make more sense and seem familiar, and then there will be those times when you want to quit altogether and proclaim "I don't need Dramatica." That would be like saying "I don't need gravity" or "I don't need oxygen." These are things that bind us together in the phsyical world regardless of our affinity for them. Real, demonstrable scientific facts.

You can ignore it all you want, but like gravity and oxygen, there comes a time when you need to know what holds a story together and what gives it motivation. That's the only way to truly move forward. The concepts and theories of Dramatica bind us together in our collective appreciation of narrative. By introducing the world to real narrative science, Dramatica helps writers develop their story sense and move beyond the trappings of prehistoric times.

Previous ←
The Toy Story Dilemma
→ Next
Dumbing Down Dramatica