The Holistic Approach to Working Through Conflict

Justifying as a means of solving problems.

The Steadfast Main Character Resolve story, one where the Main Character retains their world perspective, differs from the Changed Resolve in that the focus lies in the Work to be done, not the Dilemma. In fact, in these stories, a Dilemma never truly exists—the emphasis instead lies in maintaining that justification to carry on despite difficulties.

A No-Win Situation for the Holistic

With the shift away from outcome incurred by a Dilemma, the Holistic narrative rests its meaning on the growth of self throughout the story. What is the process that draws one closer to an outcome?

Here we see the Holistic's preference for justification as a method for conflict resolution. As conflict increases, the Steadfast Resolve must continually build up reasons, or justifications, for their approach.

The Holistic mind never wins in the eyes of a Linear thinker—they're always justifying, always making "excuses" for their behavior.

A Linear-minded approach to the Premise of Juno would read:

Keep having faith and you can ensure a bright future for a newborn.

Do this, and you get that.

As the Holistic is always concerned with self first, and that relationship between self and the outside world, their process of Steadfastness involves something much more complicated than simply flipping a switch. Instead, a Holistic seeks to maintain good vibes to break through any resistance.

Staying in a higher state of vibration breaks through your limiting beliefs and allows greater openness with others. 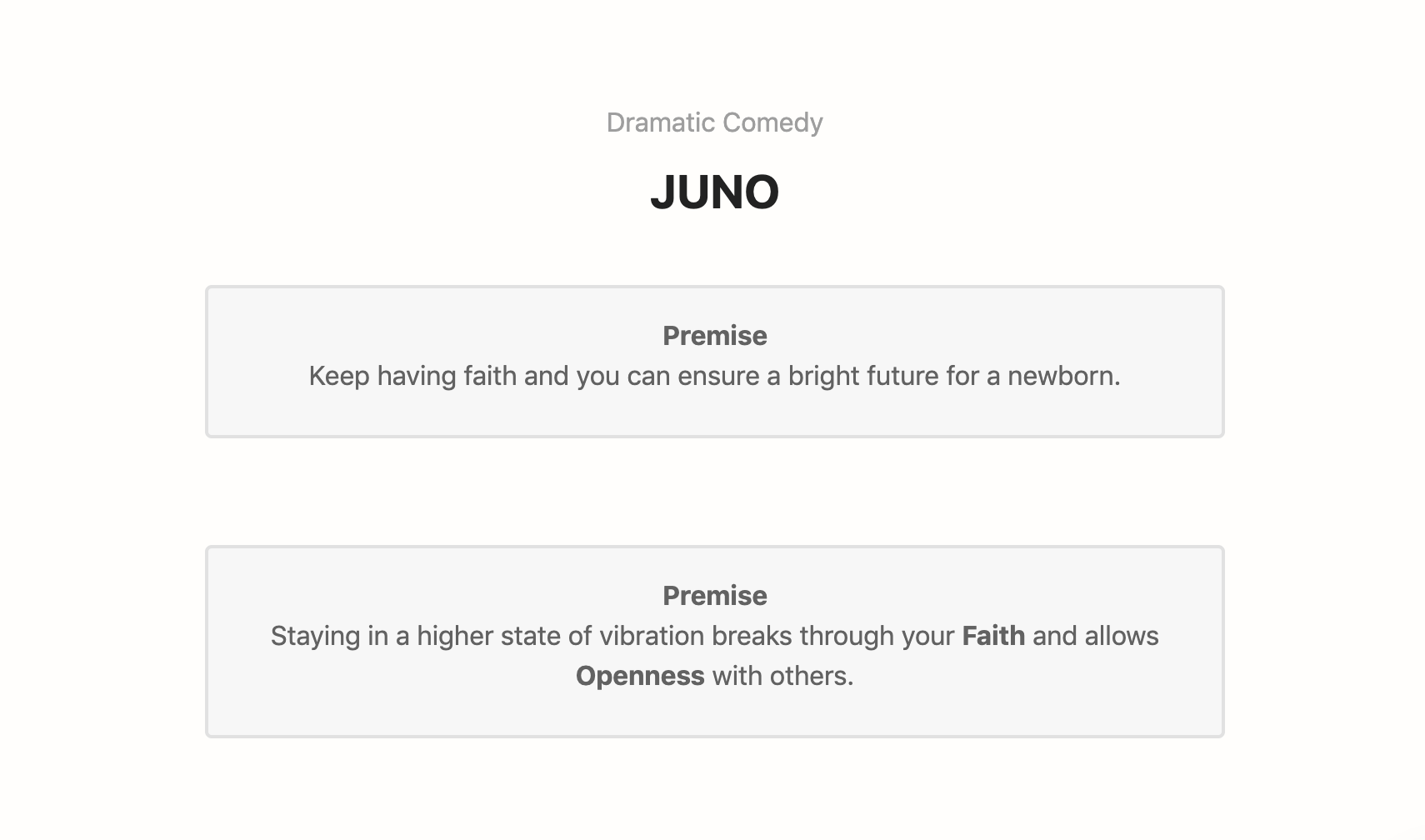 Those limiting beliefs are an indication of resistance—resistance towards finding that ultimate balance and your intended outcome. The higher state of vibration is an indication of the Storymind's willingness to be a conduit for the Universe.

The same Breaking Through Resistance Premise appears in the Drew Barrymore film Ever After. A Linear-minded thinker would see:

Keep refusing to accept things and you can find what you're looking for.

While the Holistic would see:

Staying in a higher state of vibration breaks through your doubts and allows greater generosity with others.

Again, the Steadfast Holistic mind in a Good state vibes at a level that breaks through resistances.

The counter-balance to Resistance is Allowance. As a Goal needs a Consequence, and a Problem needs a Solution, Resistance is meaningless without an appreciation of Allowance.

Here, the focus on Allowance and direction allows the outcome to present itself to the mind. A high state of flow opens the mind up to greater receptivity, as it does in Roma:

Staying in a higher state of vibration allows you to read things a particular way and address your difficult situations with others.

Many people dislike this film, suggesting it was a mistake to give Alfonso Cuaron the Oscar for Best Foreign Film. 9 times out of 10, this disgruntled nature is the result of a predominantly Linear mind struggling with the impracticality of the above statement.

How does "feeling good" allow you to read things? You read things the way you read things, end of discussion. And even so, how does the way I see things possibly help me fix a difficult situation?

It doesn't. One doesn't lead to the other in a typical cause-and-effect manner. Which is why the particular set of conflicts encountered in Roma long for a Holistic mind to counter them. You can't "fix" social and cultural revolution—but you can manage it. And Roma offers up one possible direction to address that kind of crisis.

A Bronx Tale does the same thing:

Staying in a higher state of vibration allows you to keep a love going and address your being respected by others.

This, of course, presupposes a higher state of vibration—one where the Storymind exists in a Good state.

What does the Premise look like in a Bad state?

A lower state of vibration builds up Resistance, rather than breaks through it. Those bad vibes overwhelm the Storymind with clouded visions and unclear outcomes.

Staying in a lower state of vibration builds up your resistance towards letting inhibitions go and clouds your relationships with misplaced accountability.

By remaining in that justified and disorganized state, Christian (Ewen McGregor) builds up resistance and clouds any sense of accountability between him and Satine, and pretty much anyone else in the story.

A Linear mind might try and write the same story with this Premise:

Everyone suffers the tragic consequences of becoming irrelevant when you keep living free.

45 Years is another film that follows this dynamic of building up resistance:

Staying in a lower state of vibration builds up your resistance towards being honest with yourself and clouds your relationships with antipathy.

Kate Mercer (Charlotte Rampling) builds up more and more resistance in that film as she contends with her husband's illicit affair and a subsequent aversion to her. She in kind, responds with greater and greater antipathy.

Years later, I can't remember the plot of the film, but I do remember this sense of emotional blockage that infused the entire experience. That is the experience of the Holistic narrative—relationships over plot.

The Manchurian Candidate (1962) allows confusion from every corner to seep into the narrative with its central Premise:

Staying in a lower state of vibration invites in your allowance of unpredictability and clouds your relationships with a loss of bearing.

What a strange and alien notion, yet one that makes complete emotional sense. The Holistic thrives on being open and receptive. When in a bad place, this justified state only confuses the mind with an inability to know which end is up. And whether or not what you're inviting it will increase or decrease that sense of disassociation.

With The Manchurian Candidate, low vibes attract unpredictability and in turn cloud the mind's understanding of who is who and where it stands among them. There is no solution, no goal to be achieved, no stakes to overcome. Just a pure experience of deep emotions and chaos as a mind navigates its place in the world.

Does this make this narrative any less of a story because the central character is not the driving force or that the "stakes" aren't big enough? No. Because a story is an analogy to our mind's approach to inequity and sometimes, that process of inequity resolution is more about the state of mind rather than solving a particular problem.

Breaking Down the Steadfast Holistic

In stories where the Main Character's Resolve is Steadfast, the Work becomes more critical than the Dilemma. The focus of the narrative lies on the point of attention and the response towards that perception of inequity. In Changed stories, the Main Character Crucial Element refers to either the Problem or Solution shared between the objective and subjective views of the narrative. Steadfast stories look to either the Focus or Direction element shared between these two perspectives.

Holistic stories adjust the dial even further in terms of understanding. To the Holistic, the Focus is a reference to Resistance, the Direction an indication of flow, or Allowance. Placing them alongside their Linear counterparts in the Dramatica model, we begin to appreciate the differences between the two mindsets and the quality of narrative structure present in both:

Holistics do not deal in Focuss, and their responses are rarely a reaction to what they think is a "problem." When it comes to inequities, they appreciate resistance and allowance in relation to that irritant.

Reduced down to its base elements, the Premise for Juno, a Holistic/Stop/Good story, reads:

Staying in a higher state of vibration breaks through your FAITH and allows OPENNESS with others.

Faith is the shared Focus/Resistance Element, and Openness is the Objective Story Issue.

Staying in a lower state of vibration builds up your resistance towards UNCONTROLLED and clouds your relationships with RESPONSIBILITY.

Uncontrolled is the Focus/Resistance Element, Responsibility is the Objective Story Issue.

Both narratives describe an experience with Resistance in the Holistic mind. One builds up that Resistance (Bad), one breaks through (Good).

Peeling away the layers of storytelling wrapped up in A Bronx Tale reveals these key Elements:

Staying in a higher state of vibration allows you to UNENDING and address your WORTH by others.

Unending is the Direction/Allowance Element, and Worth is the Objective Story Issue.

Tennessee Williams's play The Glass Menagerie is another instance of Holistic Allowance, but one where that flow is interrupted:

Broken down into its base Elements, the Holistic Premise for the play reads:

Support is the Direction/Allowance Element, and Delay is the Objective Story Issue.

Both narratives focus on Flow or allowance. One allows that Flow (Good), the other interrupts that flow (Bad).

The Thinking Behind While and And

Whereas the Linear operates in the realm of space and causality with notions of "if...then" and "when... also", the Holistic swims in an ocean of time and tides. The Changed Holistic focuses on balancing Inequity with Equity issuing forth an alignment that happens while Changing. The Steadfast Holistic breaks through Resistance or allows Flow and continues a process of justification. Two different versions of parallel and simultaneous balance.

With this final set of narrative arguments, we complete our exploration of the Premise. The "Greed leads to self-destruction" approach is no longer sufficient enough to describe the thematic intent of a story. A Premise needs to combine both objective and subjective concerns together, and it needs to address the Holistic or Linear mind of the narrative itself.

A complete story is a total mind—one that explores conflict from several different points-of-view, and one that approaches the underlying inequity conflict through either problem-solving or justification. With the Holistic approach to the latter now explained, writers of every mindset can now find a Premise that supports and helps foster their unique view of the world.