Fascination involves moving away from Archetypal concepts of characterization.

Archetypal Characters are the shorthand of characterization. Protagonist and Antagonist function as both Author and Audience expect, opening up and easing the channels of communication between both. When working with writers across all genres, I always recommend starting out with Archetypes—then slowly moving away from them as the story requires.

Shorthand, it turns out, is short for boring.

Unless you're writing for a particular genre.

In Aliens, both Ripley and the Aliens work as Archetypal Protagonist and Antagonist, respectively, because of the genre. Audiences don’t particularly gravitate towards sci-fi/action because of an expectation of complex characterization. That’s why every Player in the original Star Wars is a solid Archetypal Character. When you want to spend more time exploring fantastic new worlds and engaging in thrilling sequences, you need to write characters that don’t require a lot of explanation.

You need to know up is up, and down is down.

Occasionally you can break that expectation, as was done in Aliens with Bishop and Carter, to increase interest and offer surprise and delight to the Audience. But for the most part, you want to stay with tradition when writing about fantastical worlds.

Spider-Man: Into the Spider-Verse breaks all conventions of genres. Not content with merely one Archetypal Swap, the Authors of this film infuse both delight and surprise by drafting two Archetypal Swaps. The result is a film that plays against expectations (yes, irony intended), offering a glimpse into complex characterization within a genre that until now, has provided much of the same.

On the Nature of the Storymind

As mentioned in previous articles in this series on Creating Complex Characters in Complex Times, the one place Spider-Man follows through with convention is with Protagonist Miles and Antagonist Kingpin.

A complete narrative models a single human mind. In Dramatica theory, this reality is known as the Storymind. Characters are not individual people with their own minds, but rather represent various facets of one single mind.

This singular Storymind considers an inequity and works to resolve that imbalance. The introduction of the inequity is known as the first Story Driver (commonly misinterpreted as the Inciting Incident), and the focus of resolution is known as the Story Goal.

Character motivations work in the context of both the initial Story Driver and the Story Goal. Everything is connected within that concept of a single human mind at work.

In Spider-Man: Into the Spider-Verse, the fundamental inequity is the introduction of the Large Hadron Collider—specifically, turning it on. Powering up the machine opens up a hole in the space-time continuum, and draws elements of other multi-verses to Brooklyn. If the effects of this machine are not reversed, a black hole threatens to open up beneath the city.

Miles Morales pursues this reversal, while simultaneously gathering others to consider the pros and cons of taking on that task. These dual forces of Pursuit and Consider define the classic Protagonist.

Kingpin, on the other hand, seeks to avoid, or prevent, this reversal. Why? Because he wants his wife and son to reconsider their feelings towards him. Reconsider and Avoid define the classic Antagonist and Kingpin fulfills this role as expected.

It’s common for most narratives to stick with this classic arrangement between Archetypal Protagonist and Antagonist. They'll often turn to another pair (as with the example of Bishop and Carter in Aliens) for increased interest and greater complexity.

It's uncommon for most narratives to draft this greater complexity amongst two pairs of characters.

Guardian and Contagonist Not

The first example of this Archetypal Character Swap in Spider-Man: Into the Spider-Verse is found between Peter B. Parker and Uncle Aaron. 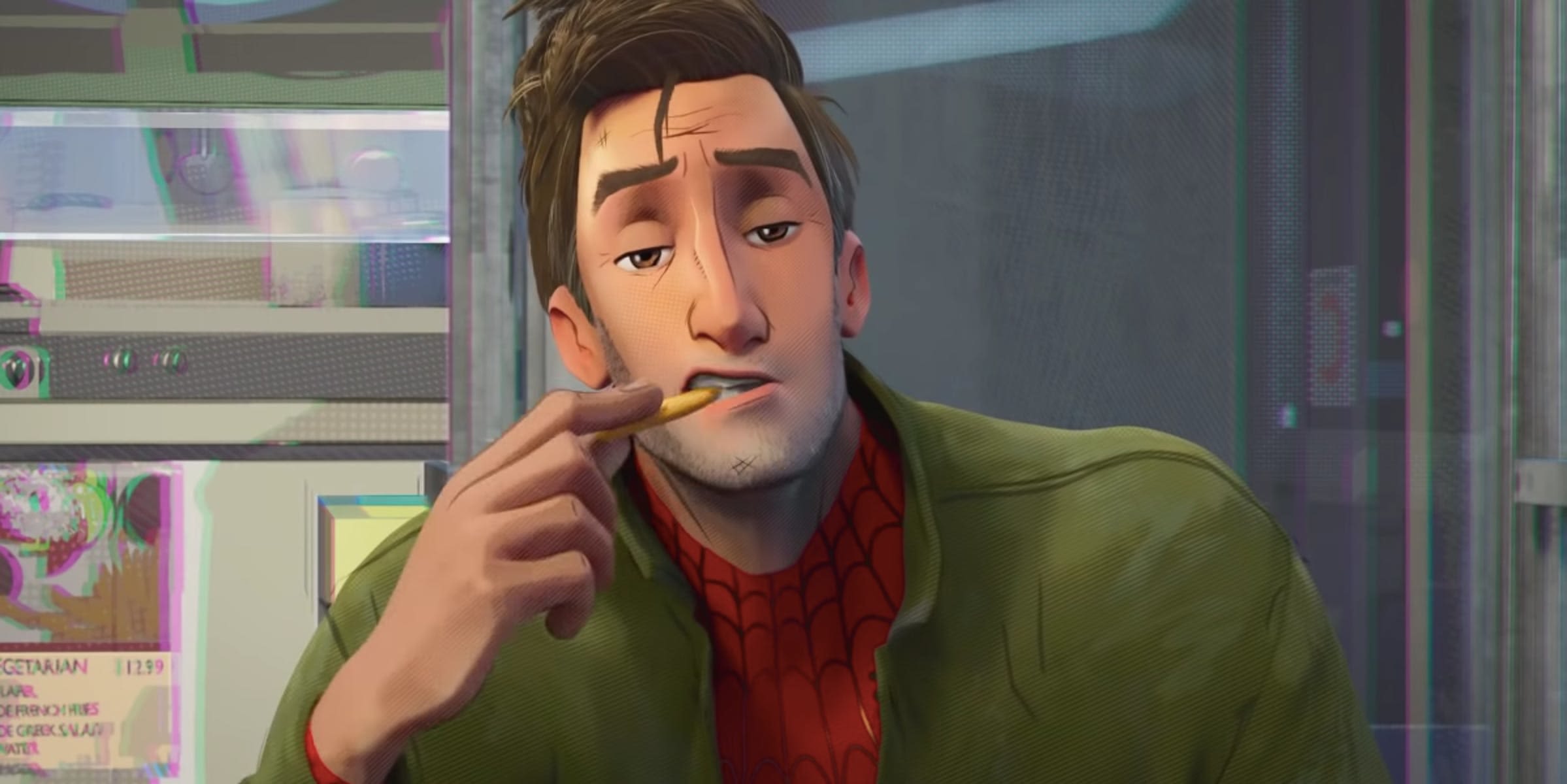 Peter B. Parker in Spider-Man: Into the Spider-Verse

Peter eats cheeseburgers first before attacking the Large Hadron Collider. He seduces Liv before finding out he needs to take her a little more seriously. And he takes a timeout in the ballroom to apologize to the wrong Mary Jane.

Uncle Aaron counsels Miles on doing better in school, yet chases the boy down on the streets of Brooklyn. When he discovers Miles’ true identity, Aaron backs off—making it more difficult for Kingpin to follow through on his motivation. Lastly, Aaron’s final words make an appeal for Miles to do the right thing.

Uncle Aaron in Spider-Man: Into the Spider-Verse

Uncle Aaron is the voice of Conscience, while also Hindering efforts within the story.

The higher interest inherent within these two characters exists because of the dissonance between their narrative Elements. They’re not Archetypal, they’re complex.

But they’re not the only ones.

When Reason and Emotion Split

Another facet of the Storymind as yet unexplored in this series are the opposing forces of Reason and Emotion. Some problems require logic to find appropriate solutions. Others trend toward emotions to help resolve perceived inequities. One is neither better than the other, and both are needed to establish a balance of considerations within the mind.

Initiative and Reticence. Conscience and Temptation. Reason and Emotion. We know the first to be relatively stable across all genres. And we've seen how Aliens and Spider-Man: Into the Spider-Verse play against type when it comes to the second pairing.

In the next article in this series, we explore the balance that exists between logic and emotion and in doing so, reveal an opportunity to play against type that goes all the way back to the original release of The Wizard of Oz.