Creating a Story from Scratch for Nanowrimo

Enthusiasm and dedication can take you only so far--a strong foundation and meaningful story structure will give you purpose and direction.

Writing an entire novel in a single month challenges Authors everywhere to simply get it done. While well-meaning and encouraging, efforts to participate in Nanowrimo finds some writers floundering without any sense of purpose or direction. Quickly setting up a framework for your literary endeavor keeps the flame of inspiration alive and works as a helpful guide those thirty days.

This week kicks off National Novel Writing Month or Nanowrimo for short. A "fun, seat-of-your-pants approach to creative writing", Nanowrimo challenges Authors to write a 50,000 word novel by 11:59PM on November 30th. While many can manage the 1,700 words a day Nano requires, writing something of substance and with purpose eludes most.

The real challenge lies in writing something meaningful. Sure, enthusiasm and dedication count, but without direction and intent that initial excitement often wanes—leaving many Authors well short of the 50K goal. A Dramatica storyform aids writers in making sure their work contains that all important purpose. You may have something to say, but aren't quite sure how to say it—Dramatica aligns your thinking, making it coherent and impactful.

And it may be you have no idea what it is you want to say, but you know you need to write something this November. Dramatica can help there too.

Assume you at least know what genre you want to write in2, and that genre is a Western. Maybe you're inspired by the HBO series Westworld, or you just saw the latest incarnation of The Magnificient Seven. Either way you know you want to write a Western, you're just not sure where to start.

If you're a Narrative First Subscriber you know you start by heading over to your Member Account page in order to download the Narrative First Western Genre Gist Collection.

All Genre Gist Collections have been rolled over into our app, Subtxt.

The main impetus for creating and developing Subtxt were these original Genre Gist Collections. Turns out, there were so many of them that Dramatica couldn’t handle it—it would take some users 10-15 minutes just for Dramatica to load up with the Gist Collections loaded.

So, I set out to create Subtxt and four years later, writers can now access hundreds of thousands of Gists (Illustrations) within a matter of seconds. What’s more, individuals can add their own Genre Gists with everyone in the community benefiting from the combined effort.

The Genre-specific Illustrations in Subtxt are, in fact, the same set available originally in 2016 as the Narrative First Genre Gist Collections. ::: 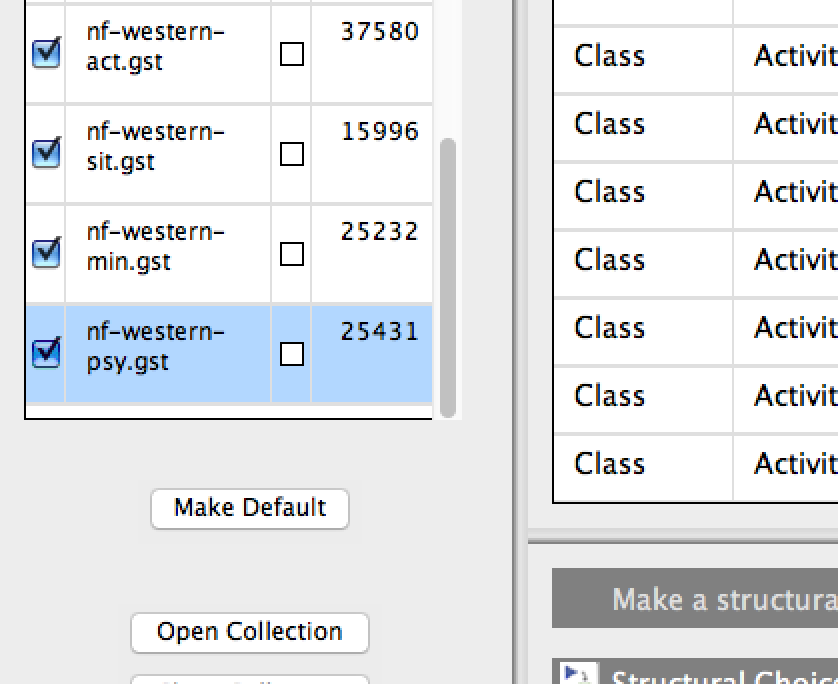 After installing the Gist Collection into your copy of Dramatica, you load up the Brainstorming Tool, set the options to Replace Existing Storyform and Assign Random Gists, and then click Spin. 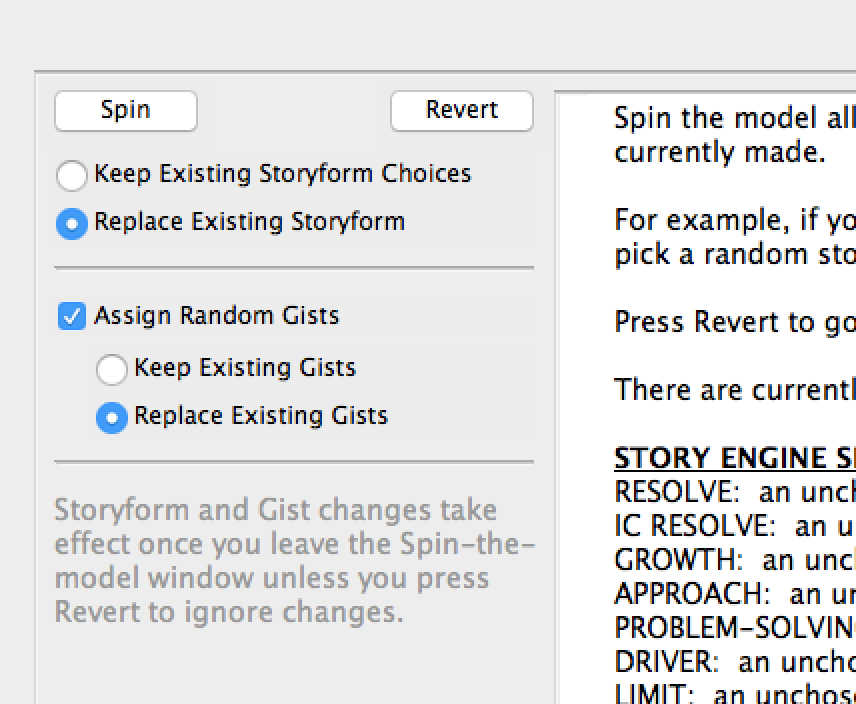 And in an instant, Dramatica delivers the structure of a meaningful story: 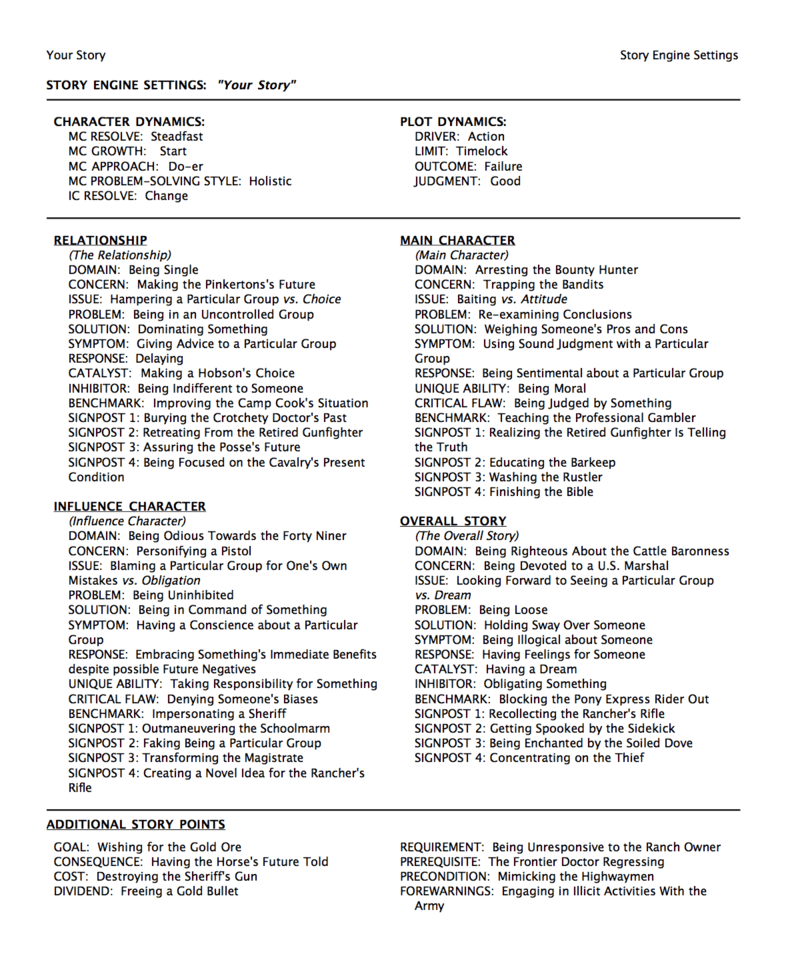 Now, this is quite a story. Looks like we have a town in conflict over Being Righteous about the local Cattle Baronness. Could be some religious overtones there, or some kind of cult at work…which instantly brings to mind some combination of the occult and a Western. Has that been done before?!

Even if it has, the version in my head—the version Dramatica sparked in my head—will be completely different than anyone else's version.

Five minutes ago I had no idea what I was going to write this November. Suddenly I know I'm writing a story about the occult in the Old West. Many see Dramatica as simply a tool for analysis—here you can clearly see it's power as a sounding board for creativity.

And that's only one story point!

Making It All Fit Together

Looking further into the storyform, we see that everyone is concerned with their devotion to the U.S. Marshal and issues of looking forward to seeing a particular group. Substitute the words "Jesus" or "The Black Witch" for "a particular group" and you only expand the potential for more cult-like conflict among the town's inhabitants.

And an Objective Story Solution of Holding Sway Over Someone? That's a dark way to bring resolution to a story about a cult. Suddenly, I really love this story!

Looking over at our Main Character, we find a character consumed with arresting a bounty hunter and trapping bandits. Perhaps the local sheriff's deputy—a young woman—because every other man who took the job ended up dead and left town. Her need to prove herself and show that she can do these things only gets her into more trouble—especially when you see that she can't stand wishy-washy people (a Main Character Problem of Re-examining Conclusions).

And Abby would do just fine, if it weren't for Jack Lawler—the local unpleasant and repulsive gold miner who cuts quick to the chase, makes his kill, and gets out. His acerbic nature and unihibited nature drives Abby crazy and challenges her to reconsider tracking down that bounty hunter.

Now where exactly did Jack come from?

If you look at the Influence Character Throughline, you will find three definite story points:

Now this is a brainstorming exercise. Which means you, as the Author, don't have to follow what Dramatica gives you as a gist precisely. These are suggestions meant to inspire situations and character.

I wasn't connecting with the specific instance of "Being Odious Towards the Forty Niner" because I didn't want Jack to be all about someone else. So I simply took the Being Odious part, mixed it up with someone who is attacking and quick to kill like a pistol, and added in the uninhibited nature. Put them all together and you have the makings of an interesting and compelling character.

What's more—you have a character that is perfectly designed to interact and challenge Abby on a deep on a personal level. Why?

Click the checkbox marked Show Gists to turn them off and you will see why Jack works so well against Abby. Underneath those clever Gists we provided you sits the Dramatica storyform and its elements of story. 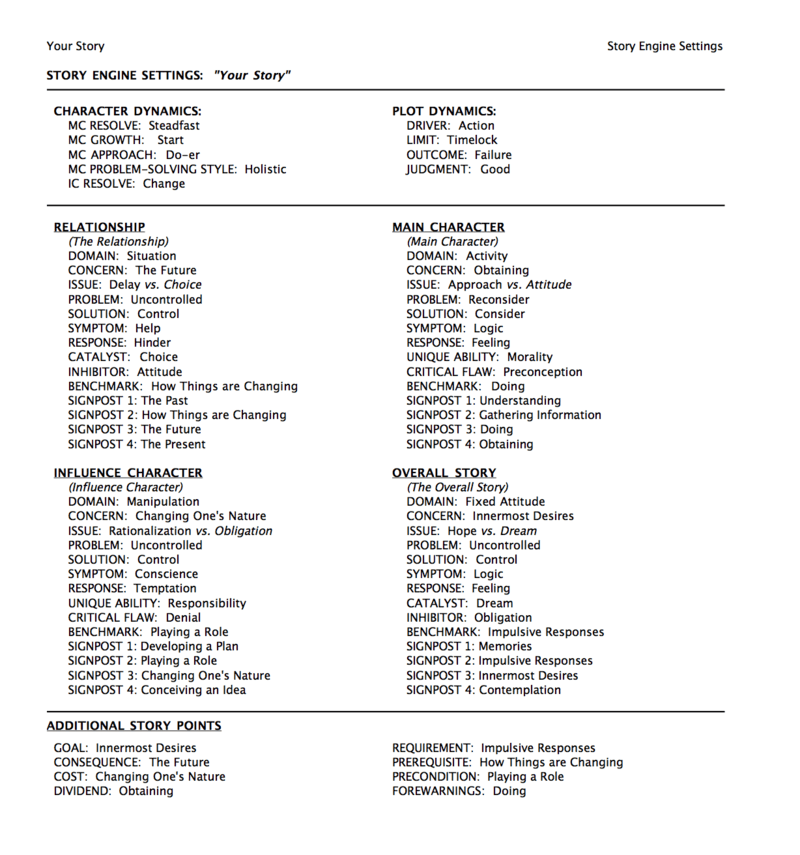 Here you can see the foundation for Jack's Throughline:

Manipulation, Becoming, and Free are exactly the kind of story elements needed to challenge Abby and her Activities, her Concern of Obtaining, and her drive of Reconsider.

Dramatica's Gists walk the border between storyform and storytelling. I guarantee I would never have discovered the character of Jack Lawler by simply reading Manipulation, Becoming, and Free. But with the Gists feature turned on, my imagination and "muse" kicks in—allowing me the freedom to create while simultaneously enjoying the safety net of those ideas connecting to structure.

In other words, I'm not wasting my time.

And Nanowrimo is all about time.

Notions of the Weeks Ahead

From here I could start writing. In fact, if I didn't have a story consulting business to run, an animated feature to write, and mentor students to mentor I would be writing this cult Western all month long. That's how excited I am about it.

And the storyform tells of so much more…

In a complete story, one character Remains Steadfast in their approach, the other Changes their Resolve. With this storyform, Abby Remains Steadfast in her drive to round up bandits—inspiring Jack to drop his odious ways and take control of his life and of others. Maybe he'll win the mayoral election or join the army…

What an amazing awesome Goal for a story about a cult! You can just see cultists on their knees wishing for Gold, led to living the righteous life by the cattle baronness, only to fail because of some dire future predicted of the town's one horse…amazing!

With the Timespace, we know everyone will be concerned with some deadline. Perhaps their wishes can only hold up until the frost comes. When that happens they'll be left with only Percy (the horse) to look to for guidance…

…which, while crazy, is shown to be a "good" thing. While the townspeople may still be caught under the fog of cultist ideals, perhaps their blindness is just what they need in order to survive. The Story Judgment of Good works with the Story Outcome of Failure to indicate a story of Personal Triumph. While they failed in their quest to wish Gold into existence, relying on something tangible…something they already had (the horse)…could be the one thing that gives them hope. And maybe that's all Abby needed to learn as well…

Why remake a classic when you can create an instant classic in less than an hour?! The Magnificent Seven may be a great story…but it doesn't have Abby, it doesn't have the righteous Cattle Baronness or the cultists who turn to a horse for guidance, and it certainly doesn't have Jack Lawler, acerbic gold miner turned General. In the time it took to write this article (1700 words exactly by the way), I now have the foundation for a compelling and exciting story to write this month.

Dramatica offers writers and participants of Nanowrimo an opportunity to expand their writing horizons while ensuring that what they write contains purpose and meaning. Some enjoy writing by the seat-of-the-pants, but end up discouraged and frustrated when their seat fails to carry them through the pointless jumble that spills from their minds. A Dramatica storyform puts the pieces together in such a way that they all add up to a greater purpose: telling a story that means something.

The world needs your novel.

They also need it to mean something.